A key piece in the Microsoft versus VMware debate is to understand the products so you can compare like with like:

In green is Hyper-V, a free Hypervisor.  If you disagree and say that you must pay for Hyper-V then please send me your employer’s name and address so I can call the Business Software Alliance to make an easy $10,000 reward on your illegal licensing of Windows Server on vSphere.

In red is System Center 2012 R2, purchased as a suite (Server Management Licenses).  Note that Open licensing customers can buy a bundle including Windows Server and System Center at a small discount called CIS, and customers with more than 25 hosts can buy a similar bundle with a greater discount called ECI.  This licenses the all VMs on a host for Windows Server and System Center (any virtualization), and you can optionally use this licensing for the host itself (hence the free Hyper-V).

In pink, is the vCloud suite from VMware, comprising a bunch of loosely couple vProducts and vSphere 5.1.  There once was a video of a VMware architect who said that VMware were years behind System Center.  I can’t find that video anywhere now – it looked like it was recorded secretly from a phone.  I also once attended a VMware presentation on the products on this suite.  The two presenters confused even themselves, and lost the audience in 10 minutes. 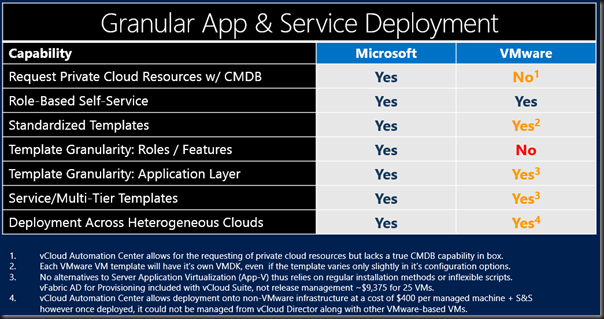 System Center is a deeply integrated suite tools you can see some of this from the above:

Nagios and similar ping based monitoring is for the past.  System Center, particularly Operations Manager, provides the granular monitoring of the infrastructure (from the network up) that the admin cares about and service (SLAs) with the end user perspective that the business cares about.

VMware’s focus is on the hypervisor – that’s indicated by the need to buy additional software to monitor physical infrastructure … there’s more to a cloud than a host!

The focus of monitoring is pretty focused, whereas System Center scales well beyond just the Microsoft world, including network, servers, storage, and third party applications.  You can even monitor the all-important coffee pot

Wait for the vBaby to try make a joke about that point – it is sad that this is the tactic that VMware employees now have to resort to.

System Center does some rather special things in monitoring.  End user perspective monitoring for SLA and service availability can be done from any OpsMgr agent.  It can be stretched into Windows Azure via Global Service Monitoring (GSM) to see how available your local application is to the globe.  And you can extend your monitoring into the same Azure data centers via System Center Advisor to get the latest in best practice analysis.  All of these monitors and reports are surfaced through the OpsMgr console.  Reports can be scheduled to be spit out in a large number of formats for the business.

Devs and testers also have integration into their local cloud via System Center; they can push out a new environment from the tool (Visual Studio) that they live in.   No need to pay for more add-ons for this to work.

I am deliberately skipping DPM.  In my opinion, most anyone big enough to use System Center will rarely use System Center Data Protection Manager.  They are probably choosing the same backup tools that also support vSphere.

This is just a very small sample of the 3rd parties that support System Center.  You’ll notice VMware is in there

Actually, the Veeam management pack for monitoring vSphere is superb.  I’ll admit it’s by far superior to the dreadful Hyper-V management pack.  Hardware vendors such as Dell and HP make huge efforts to support System Center, e.g. bare metal Hyper-V host deployment is a breeze with HP or Dell.  And the monitoring … oh the information is amazing.

VMM will quite happily manage vSphere 5.1, including VM templates, service templates, using it as the compute in your cloud, vMotion, etc.  And it’ll do the XenServer dance too.  Orchestrator has a Microsoft-written integration pack for vSphere to give you runbook automation.

Operations Manager does support monitoring of 3rd party products.  Realistically, those management packs come from 3rd parties.  Some are 100% free, e.g. HP and Dell.  Some are free to a point, e.g. Veeam.  And some require a purchase.

With the Microsoft stack we can easily extend the Microsoft private cloud into service providers and Windows Azure using System Center and Hyper-V Network Virtualization.  Service Provider Foundation provides an interface into the hoster’s VMM infrastructure that the customers’ App Controller installs can plug into.  Hyper-V networking and the cloud pieces of System Center were designed for this purpose as a single unit. 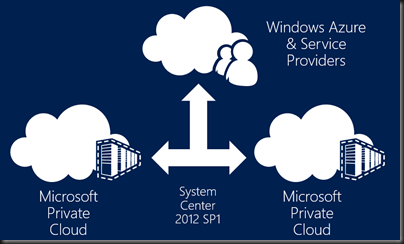 Not so simple with the VMware stack where there are a lot more acquired vProducts involved.

VMware made a pretty good virtualization stack.  But their managment stack reminds me of frameworks that I worked with in the 1990s … lots of acquired products with a v- slapped in front of them and thrown into a license bundle.  That’s not integration … it’s a collection of confusing and loosely coupled point solutions.  VMware’s focus continues to be on what they have historically done: the virtualisation layer.

System Center was designed for purpose.  System Center 2012 R2 was designed to work at the same time as and with Windows Server 2012 R2, with hybrid cloud computing being the focus.  Hybrid meaning that the solution spans private and public, and with cloud, there is a focus on what the business really cares about: service (self-service, automation, rapid delivery, easier administration, reporting, and SLA).

Hmm, and I didn’t even bring up Datacenter Abstraction Layer (DAL) where VMM 2012 R2 will build bare-metal SOFS storage, provision SANs via SMI-S (including fiber channel zoning), or manage top-of-rack switches.  You can only do so much stomping, I guess.

The choice is yours: service versus virtualization.