With the increased release cadence (that’s 1 shot in the WS2012 R2 drinking game) that Microsoft has adopted, they want to make it easier for us to upgrade our hosts.  The first critical steps in enabling that were actually delivered in WS2012 Hyper-V:

That latter one is important, because we still cannot do an in-place upgrade of a Failover Cluster.  Yes, Microsoft has heard the feedback.  Just give them more of it if you are talking to them directly, especially if it’s a local/visiting rep from the Windows Server & System Center product group (giving feedback to a person from the local subsidiary is pointless).

We can use cross-platform Live Migration from WS2012 Hyper-V to WS2012 R2 Hyper-V to get zero-downtime “upgrades”.  Scenarios include: 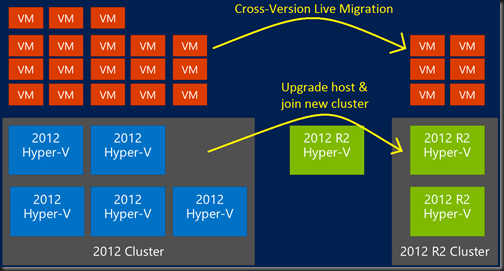 This also means that those of you planning WS2012 upgrades/installs shouldn’t stop.  You, of course, should be buying Software Assurance for your VM Windows Server licensing (which includes the host), and can use this zero downtime to get from a great hypervisor to an even better one with minimal effort.