Elden kicks off. He owns Failover Clustering in Windows Server.

Summary: not forgotten.  We can fully manage FC SAN from SysCtr via SMI’-S now, including zoning.  And the enhancements in WS2012 such as TRIM, UNMAP, and ODX offer great value.

Hector, Storage PM in VMM, comes up to demo.

Into the Fabric view of the VMM console.  Fibre Channel Fabrics is added to Providers under Storage.  He browses to VMs and Services and expands an already deployed 1 tier service with 2 VMs.  Opens the Service Template in the designer.  Goes into the machine tier template.  There we see that FC is surfaced in the VM template.  It can dynamically assign or statically assign FC WWNs.  There is a concept of fabric classification, e.g. production, test, etc.  That way, Intelligent Placement can find hosts with the right FC fabric and put VMs there automatically for you.

Opens a powered off VM in a service.  2 vHBAs.  We can see the mapped Hyper-V virtual SAN, and the 4 WWNs (for seamless Live Migration).  In Storage he clicks Add Fibre Channel Array.  Opens a Create New Zone dialog.  Can select storage array and FC fabric and the zoning is done.  No need to open the SAN console.  Can create a LUN, unmask it at the service tier …. in other words provision a LUN to 64 VMs (if you want) in a service tier with just a couple of mouse clicks … in the VMM console.

In the host properties, we see the physical HBAs.  You can assign virtual SANs to the HBAs.  Seems to offer more abstraction than the bare Hyper-V solution – but I’d need a €50K SAN and rack space to test

So instead of just adding vHBA support, but they’ve given us end-end deployment and configuration.

In 30 seconds, 3% of BITS VM template creation is done.  Using same setup but with ODX, but the entire VM can be deployed and customized much more quickly.  In just over 2 minutes the VM is started up.

WS2012 R2 is cloud optimized … short time frame since last release so they went with a focused approach to make the most of the time:

Focus on capex and opex costs.  Storage and availability costs 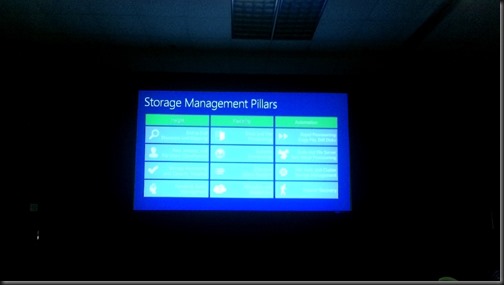 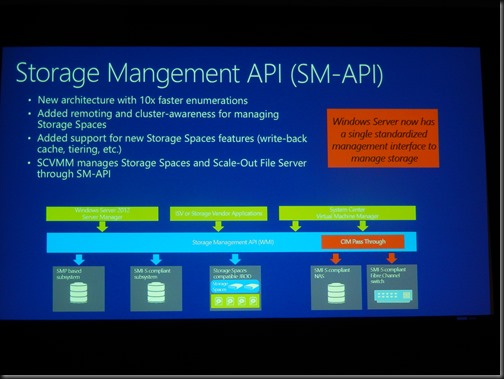 Me: You should realise by now that System Center and Windows Server are developed as a unit and work best together.

He creates a Physical Computer Profile.  Can create a VM host (Hyper-V) or file server.  The model is limited to that now, but later VMM could be extended to deploy other kinds of physical server in the data centre.

Hector deploys a clustered file server.  You can use existing machine (enables roles and file shares on existing OS) OR provision a bare metal machine (OS, cluster, etc, all done by VMM).  He provisions the entire server, VMM provisions the storage space/virtual disk/CSV, and then a file share on a selected Storage Pool with a classification for the specific file share.

Now he edits the properties of a Hyper-V cluster, selects the share, and VMM does all the ACL work.

Basically, a few mouse clicks in VMM and an entire SOFS is built, configured, shared, and connected.  No logging into the SOFS nodes at all.  Only need to touch them to rack, power, network, and set BMC IP/password.

We now have 3 QoS categories for SMB:

Gives you granular control over converged networks/fabrics because 1 category of SMB might be more important than others.

Can set Maximup IOPS and Minimum IOPS alerts per VHDX.  Cap IOPS per virtual hard disk, and get alerts when virtual hard disks aren’t getting enough bandwidth – could lead to auto LM to another better host.

Has a 2 node SOFS.  1 client: a SQL server.  Monitoring via Perfmon, and both the SOFS nodes are getting balanced n/w utilization caused by that 1 SQL server.  Proof of connection balancing.  Can also see that the CSVs are balanced by the cluster.

Jose adds a 3rd file server to the SOFS cluster.  It’s just an Add operation of an existing server that is physically connected to the SOFS storage.  VMM adds roles, etc, and adds the server.  After a few minutes the cluster is extended.  The CSVs are rebalanced across all 3 nodes, and the client traffic is rebalanced too.

That demo was being done entirely with Hyper-V VMs and shared VHDX on a laptop.

Another demo: Kicks off an 8K IO worklaod.  Single client talking to single server (48 SSDs in single mirrored space) and 3 infiniband NICs per server.  Averaging nearly 600,000 IOPS, sometimes getting over that.  Now he enables RAM caching.  Now he gets nearly 1,000,000 IOPS.  CPU becomes his bottleneck

Nice timing: question on 32K IOs.  That’s the next demo

RDMA loves large IO.  500,000 IOPS, but now the throughput is 16.5 GIGABYTES (not Gbps) per second.  That’s 4 DVDs per second.  No cheating: real usable data, going to real file system, nor 5Ks to raw disk as in some demo cheats.

The Dedup filter redirects read request to the chunk store.  Hyper-V does buffered IO that bypasses the cache.  But Dedup does cache.  So Hyper-V read of deduped files is cached in RAM, and that’s why dedupe can speed up the boot storm.

A PM I don’t know takes the stage.  This demo will be how Dedup optimizes the boot storm scenario.  Starts up VMs… one collection is optimized and the other not.  Has a tool to monitor boot up status.  The deduped VMs start up more quickly. 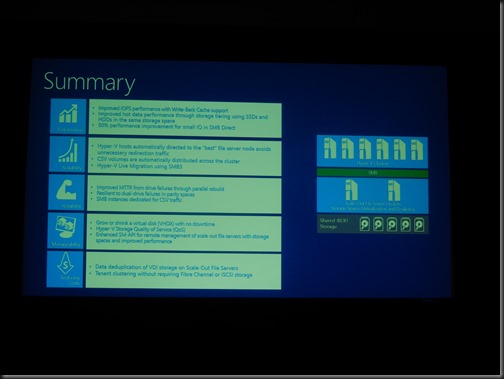