Start was some metrics achieved stuff.  Summary: Lots of IOPS. 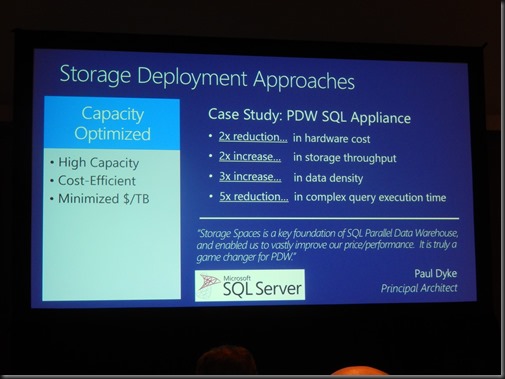 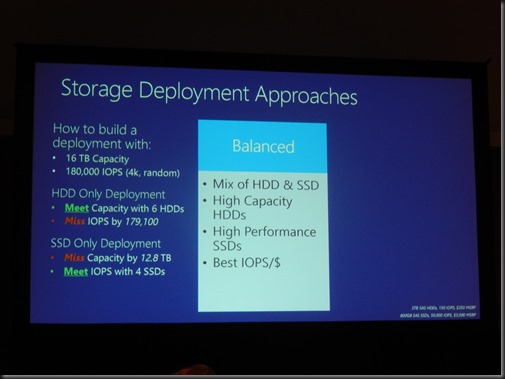 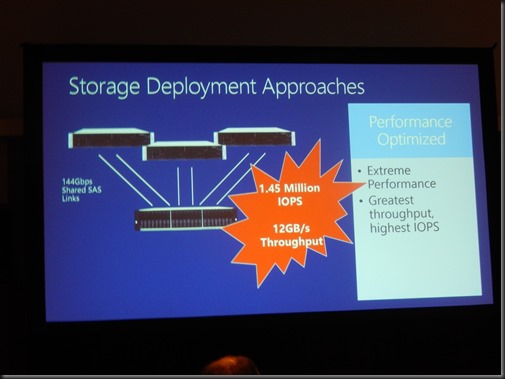 Data is spread around the disks in the storage pool.  They parallelize the rebuild process. 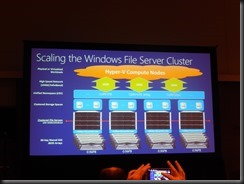 Can we seamlessly merge these?

The most compelling ratio appears to be 4 to 12 SSDs in a 60 slot device, with the rest of the disks being HDDs.

In the background, the file system actively measures the activity of file slices.  Transparently moves hot slices to the SSD tier, and cold slices to the HDD tier.

Tiering (analysis and movement) is done daily.  The schedule is configurable (change time, do it more than daily).  The slices are 1 MB in size.  So tracking watches 1 MB slices, and tiering is done on 1 MB slices. 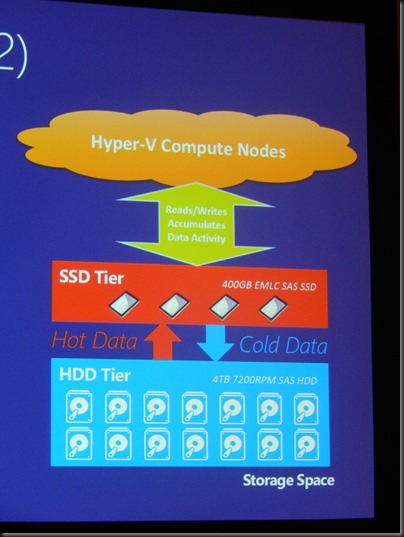 Per virtual disk, persistent write cache.  It smoothens out write bursts to a virtual disk.  Uses the SSD capacity of the pool for increased IOPS capacity.  Configurable using PowerShell.  Great for Hyper-V which needs write-through, instead of battery powered write cache.

Get-StoragePool to see the disks.  Look at FriendlyName and MediaType attributes.

Now we have a drive with automated scheduled storage tiering.

Optimize-Volume –DriveLetter E –TierOptimize  ….. this will force the maintenance task to run and move slices.

He increases the write workload to the disk. A quick spike and then the SSD takes over.  Then increases again and again, and the write-back cache absorbs the spikes. 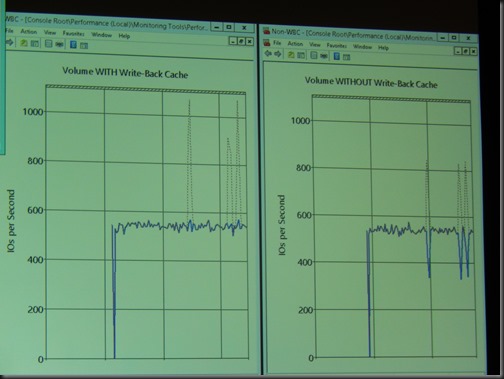 Question: How many tiers are supported in WS2012 R2?  2.  But the architecture will allow MSFT to increase this in later releases if required.

No docs on sizing Write-Back Cache.  They want the WBC to be not too large.  Up to 10 GB is being recommended right now.  You can reconfigure the size of the WBC after the fact … so monitor it and change as required.

He can’t say it, but tier 1 manufacturers are scared *hitless of Storage Spaces.  I also hear one of them is telling porky pies to people on the Expo floor re the optimization phase of Storage Spaces, e.g. saying it is manual.

Is there support for hot spares?  Yes, in WS2012 and R2.  Now MSFT saying you should use space capacity in the pool with parallelized repair across all disks in the pool, rather than having a single repair point.

If I have a file on the SSD tier, and the tier is full, writes will continue OK on the lower tier.  The ReFS integrity stream mechanism can find best placement for a block.  This is integrated with tiered storage spaces.

On adding physical disks to the storage space: old data is not moved: instant availability.  New writes are sent to the new disks.

Should hard drive caches be turned off?  For performance: turn it off.  For resilience, turn it on.  Note, a cluster will bypass the disk cache with write-through.

There is some level of failure prediction.  There are PoSH modules for detecting issues, e.g. higher than normal block failure rates, or disks that are slower than similar neighbours.

Ah, the usual question: Can the disks in a storage space span data centers.  The members of a storage pool must be connected to all nodes in a SOFS via SAS, which makes that impossible.  Instead, have 2 different host/storage blocks in 2 sites, and use Hyper-V Replica to replicate VMs.

When to use Mirror, Parity, or Simple virtual disks in a storage space? 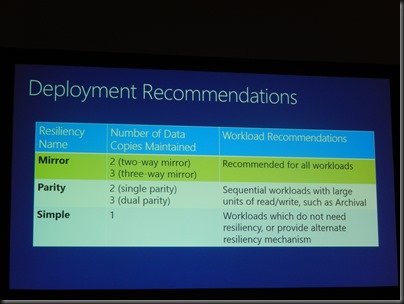 A storage space will automatically repair itself when a drive fails – and then it becomes resilient again.  That’s quick thanks to parallelized repair.

Love hearing a person talk who clearly knows their stuff and is very clear in their presentation.

Holy crap, I have over a mile to walk to get to the next storage session!  I have to get out before the Q&A ends.