What was done in Windows Server 2012: 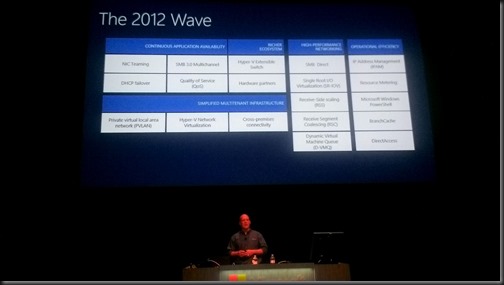 DVMQ on the host NICs (for the virtual switch) allows us to use vRSS.

There is a new Dynamic Mode in WS2012 R2.  This balances based on flowlets.  Optimized utilisation of a team on existing hardware.

You can spread your traffic inbound and outbound.  In WS2012, can only balance on outbound.  EG, 1 VM would be pinned to one pNIC.  Now “flowlets” give the OS much finer grained load balancing, across all the NICs, regardless of what workload you are running.

In WS2012 you can block/allow/measure based on source and destination address (IP or MAC).

In WS2012 R2, you can allow or block for specific worklaods:

There is now stateful packet inspection, understanding a transaction.

Remote monitoring of WS2012 traffic can be done, but it is difficult.  In WS2012 R2, you can mirror and capture traffic for remote and local viewing.  GUI experience with Message Analyzer (the new NetMon).  Supports remote offline traffic captures.  Filtering based on IP addresses and VMs. 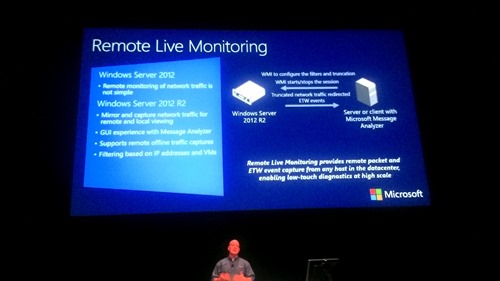 Gabe comes up to demo.

Dynamic Mode LBFO will be first.  We see traditional WS2012 NIC teaming.  Dynamic is enabled, and we see all NICs being roughly balanced in PerfMon.

Enabling it in the demo sees throughput go up for the VM – yes, CPU utilisation goes up in the VM, but that’s why the VM was given more vCPUs to allow more networking resources – otherwise the traffic is limited by being pinned to a single vCPU.

The goal was to make Ping better.  It’s a new PowerShell cmdlet.  It pings, but it returns back a lot of information: Soutce IP, remote IP latency, test a port, get more detailed info, route information, etc.

This is a very nice tool, and a nice hook to get people into looking at some basic PowerShell scripting, to extend what the cmdlet can already do by itself.

3 promises that the network should provide: 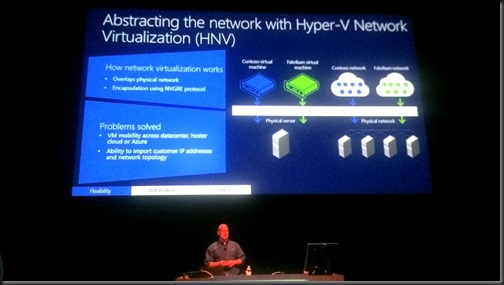 HNV uses a 24-bit identifier meaning the thing is extremely scalable, when compared to the very limited 4096 possible VLANs.

HNV can dynamically learn Consumer Addresses being used in the VM Network.  Allows for guest DHCP and guest clusters to be used in HNV VM Networks.

NIC teaming is supported on the host.  NVGRE Task Offload Enable NICs will be able to offload the processing associated with NVGRE.  Emulex and Mellanox are early suppliers.

A host admin/operator can use a PoSH cmdlet to test connectivity to a VM, and validate that the VMs can communicate without having access to the VM (network-wise).

One layer is the forwarding switch.  The Cisco Nexus 100V is out.  NEC has an OpenFlow extension.  In WS2012 R2, the HNV filter is moved into the virtual switch.  3rd party extensions can now work on the Consumer Address and the Provider Address (both VM and physical addresses).

Example, a virtual firewall extension might want to filter based on CA and/or PA. 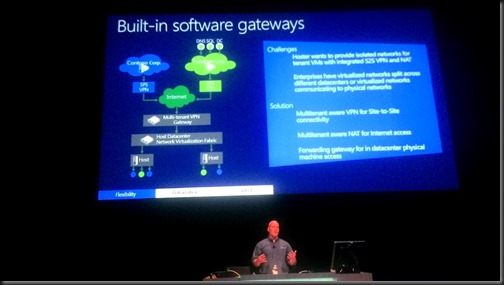 2 clients in HNV. Both using different VPN protocols, SSTP and IKEv2.  No access without VPN tunnels.  Connects the VPNs of Red.  Now Red can connect to Red VMs and Blue cannot to anything.  Connects Blue’s VPN and Blue can now connect to Blue VMs.

Added in WS2012, primarily for auditing IP usage and planning.

In WS2012 R2, you can manage IPs in the physical and virtual spaces.  It integrates with SCVMM 2012 R2, and allows you to deploy IP pools, etc. 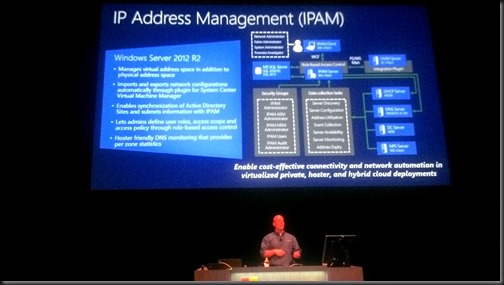 In my words, WS2012 innovated, and WS2012 R2 has smoothed the corners, making the huge strides in 2012 more achievable and easier to manage.  And a bunch of new features too. 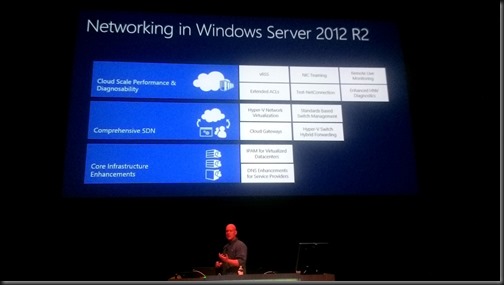