I’ve spent the last few days working on the new networking in VMM 2012 SP1 to build new Windows Server 2012 hosts/clusters from bare metal and deploy virtual machines.  There are a lot of parts in this puzzle.  And the terminology is quite different to what we’re used to in Hyper-V.  In the end, I was deploying hosts with converged fabrics and creating clusters with SMB 3.0 (Scale-Out File Server) storage.

With so many pieces I thought it would be a good idea to map out everything that was required in my lab deployment.  Here’s what it looks like … note that you might need to look at the original image by clicking on it. 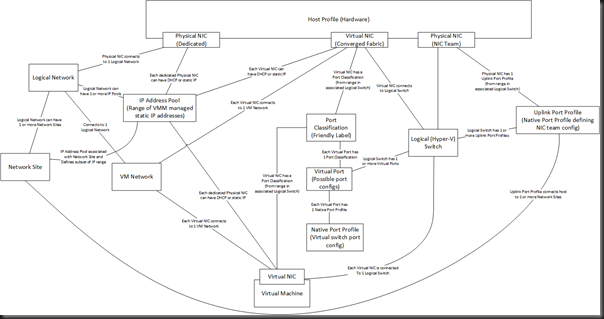 I have not gone further with the map, e.g. mapping to service templates, clouds, etc.  I’ve focused here on host and virtual machine networking deployment.