Up to now in this series of posts, I’ve been focusing on scenarios where you want to do NIC teaming using physical NICs on the host (configured in the management OS).  But what if you wanted to do NIC teaming in the virtual machine?  You can do this if you’re using:

Why the hell would you want to create NIC teams in the guest OS?  Look at the following image.  The virtual switch is connected to a NIC team.  If any physical NIC or fault tolerant physical network appliance fails then the virtual machines stay online.  That gives us LBFO for the single virtual NICs. 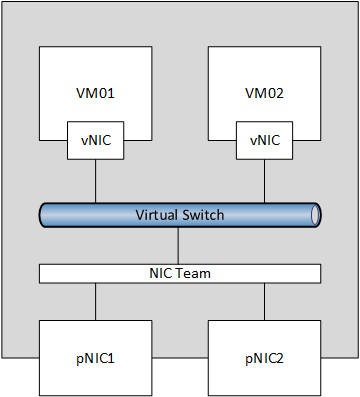 But this architecture is not always applicable.  What if you decided to implement Single Root IO Virtualization (SR-IOV)?  With this architecture, virtual machine network traffic will bypass the management OS network stack, and this means it bypasses the NIC team!  Virtual machines connect directly to Virtual Functions (VFs) on the physical NIC.  The host won’t give you LBFO then.  So what do you do?

The below illustration is the NIC teaming architecture for SR-IOV.  There is no NIC team in the host.  In my example, each physical NIC is connected to a different physical access switch.  This gives network path fault tolerance.  A virtual switch is created for each physical NIC.  Note: no NIC team in the management OS.  The virtual machine is created with 2 NICs.  The guest OS (WS2012) is deployed/installed in the virtual machine, and WS2012 NIC teaming is configured in the guest OS.

Note: I said that the SR-IOV enabled NIC route traffic through a virtual switch.  That is true, most of the time.  The virtual switch is mapped to a Physical Function (PF) on the NIC, the virtual NIC is connected to the virtual switch, and this creates an association with the physical NIC.  Traditional virtual network is employed during Live Migration and maintained if the destination host does not support SR-IOV.  And that’s why the below diagram is drawn as it is. 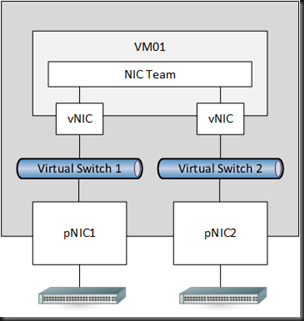 The benefit here is you get all the scalability and performance of SR-IOV, and you get LBFO.  The problem is that you’re now having to do LBFO in every VM that will require it (and we know they all will) instead of creating the NIC team once in the management OS.  This would prove to be tricky in clouds, where IT has nothing to do with a VM – clouds feature self service.  That means guest OS administration is the responsibility of the delegated admin (a “user”: developer, tester, application administrator, a branch office admin, and so on).  These are often the people you least want to have touching complex infrastructure.

There are some support statements from Microsoft for guest OS teaming:

Although you can have 12 virtual NICs in a virtual machine (by mixing Legacy and Synthetic types), a guest OS NIC team supports just 2 virtual NICs.  There is nothing to stop you creating larger NIC teams, but they will not be supported.

Do not configure VLAN IDs for virtual NICs that will be teamed.

Note: NIC teaming must be enabled in the advanced properties of the virtual NIC in the VM’s properties to do guest OS NIC teaming.

The only valid configuration for a NIC team created inside of a VM is:

Helpfully, the GUI (LBFOADMIN.EXE) greys out these two settings when you create a NIC team in a guest OS.  Just keep these settings in mind if you try to create a guest OS NIC team using New-NetLBFOTeam.