These are notes from an online webcast by the Microsoft Partner Network.  I’m am far from a Lync guy so please bear with me

The recording should be on MPN within 48 hours.

Note that the preview bits are out for evaluation/testing.  GA will probably be quite different.

Every Day Apps We Use 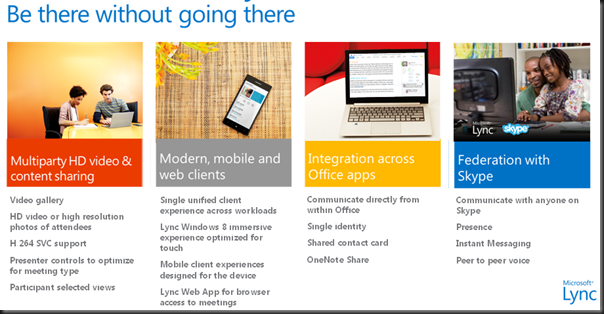 Note the federation between Lync 2013 (online and on-premises) and Skype.  No news on 2010 federation yet.

On the DR side, they are “improving” metro-site resiliency (between data centres).  Check the docs – calling it Easy Site Recovery.  Less requirements than 2010 and more functionality offered.

VDI support: There will be some 3rd party support statements.  MSFT has worked on VDI scenarios to provide high quality experience with a small plugin on the client.  It should be much improved over 2012, e.g. not using an IP phone.

IPv6 is supported in this version of Lync.

See up t 5 live video streams.  Non-active speakers are thumbnailed below, and are promoted to video as they speak.

H.264 SVC should make it easier to integrate other video systems into Lync, apparently.  SVC can use codecs for different quality/resolutions for different device types.

The Presenter Is In Control 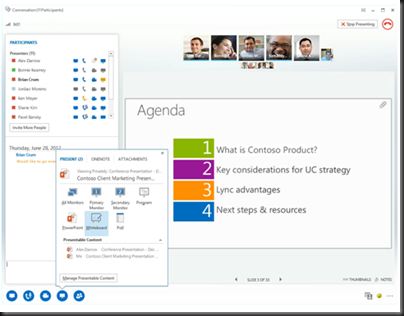 The presenter can tune the view to suit the content/meeting as the set up the meeting.

There is an immersive optimised Windows 8 Lync app: 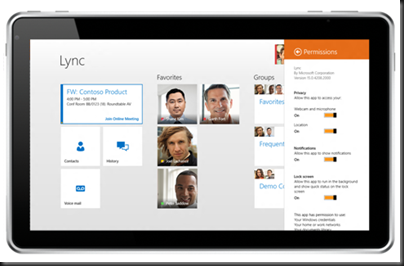 Mobile are getting VOIP and video in the Lync app.  Mobile phones will not have full meeting content in this release.  Desktop/app sharing being added to iPad (full set of meeting content).

The Web app is being enhanced for Windows & Mac.  They are getting VOIP and Video – no need for a 50 MB download for the once-off partner/customer/supplier attendee.  IE, Safari, and FireFox offered on PC and Mac.  There is a control to default to the webapp for Mac users.

Video will not be available on Exchange OWA.

The people cards are Lync powered.  You can contact anyone from throughout Office apparently.  See what they’ve been saying recently on Social Networks, etc. 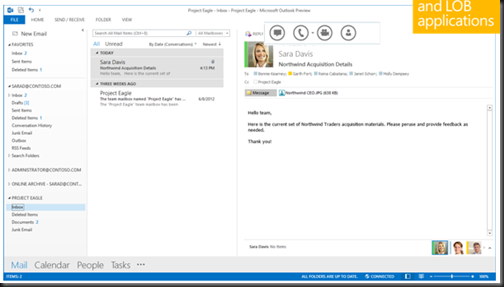 OneNote and Lync meetings are integrated.  You can associate a note with a meeting invite.  You can share OneNote as additional in-meeting content.  OneNote updates automatically with the meeting attendees (meeting minutes – see their invite acceptance status).  The notes can be shared from many places: SkyDrive, SharePoint, your PC.

Federated.  Communicate with hundreds of millions of people with presence, IM, and voice.  E.g. talk to family at home when you’re on the road or in the office.  Talk with other companies that are on Skype.  Provide support to customers on Skype.

Video is not added in this first release of the federation.  To be in a “future”, “very quick” release.  It is a “high priority”.  It won’t take 3 years.

Archiving of IM being added in the online product.  Split domain being added so you can split between on-premises and online – Lync Hybrid.

Today, UK and USA users can add PSTN to their Lync online through a Telefonica subsidiary.  The SIP trunks are to the MSFT data centre (alien speak to me – I’m allergic to phones).

In this release, you can link your PBX into Lync Online – Lync Hybrid.  You can still use you existing contracts, PBX, etc.  More details to come from MSFT later or in preview documentation.

Persistent Chat not in online product.  Response Groups not in this release of Lync Online.

Windows 8 Lync App Is Not Public Yet 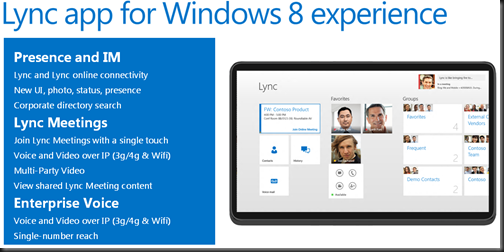 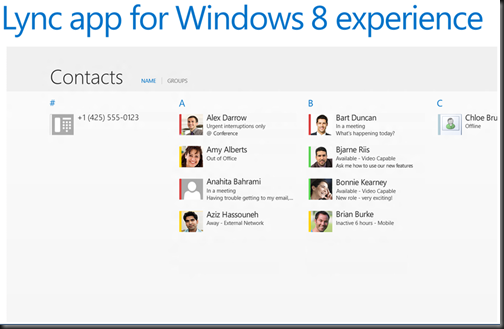 Note that the Lync app also uses the Windows 8 charms.

Designed for side-by-side, only possible on Windows 8: 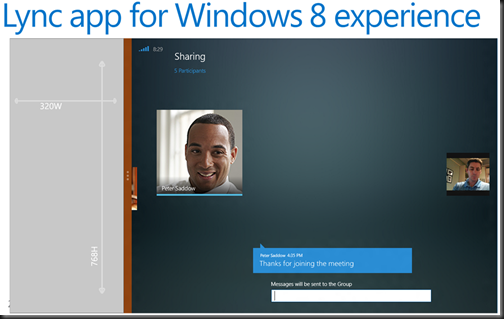 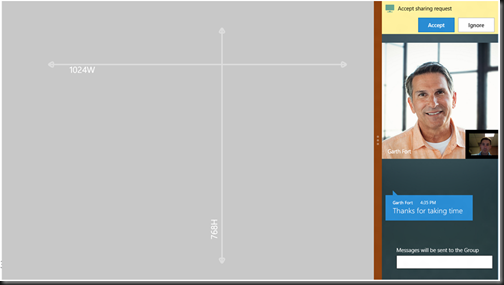