Earlier this week I posted some notes from a TechEd North America 2012 session that discussed the Cluster-In-A-Box solution.  Basically, this product is a single box unit, probably with two server blades, all the cluster networking, and JBOD storage attached by SAS Expanders, all in a single chassis.  For a small implementation, you can install Hyper-V on the blades in the box, and use the shared JBOD storage to create a small, economic cluster.

I’ve been thinking about the process for expanding our scaling beyond this box.  At the moment, without playing with it because it doesn’t exist in the wild yet, I can envision three scenarios.

On the left I have put together a cluster-in-a-box.  It has 2 server blades and a bunch of disk.  Eventually the company grows.  If the blades can handle it, I can add more CPU and RAM.  It is likely that the box solution will also allow me to add one or more disk trays.  This would allow me to scale up the installation.

I’ve reset back to the original installation, and the company wants to grow once again.  However, circumstances have changed.  Maybe one of the following is true:

I’ve reset once again.  Now the company wants to grow.  Step #1 because my box allows it, is to scale up.  I add more disk and CPU and grow the VM density of my 2 node cluster.  But eventually I start approaching a certain trigger point where I need to buy once again.  What I can do now is add a second cluster in a box, probably starting with a basic kit, and grow it with more disk and CPU as the company grows.

Let’s consider another scenario.  The company starts with a cluster in a box and scales it up.  We’re approaching the point where we need to scale out.  We have a choice:

My big concern might be flexibility and simplicity as I scale the size of the infrastructure.  Having lots of clusters is with isolated storage might be good … but I think that’s a minority of situations.  Maybe we should migrate to something more traditional … but not iSCSI because we already own a cool storage platform!

In this case, I’m going to leverage a few things we can do in Windows Server 2012:

Obviously I have not tested this but here’s how I think it could go: 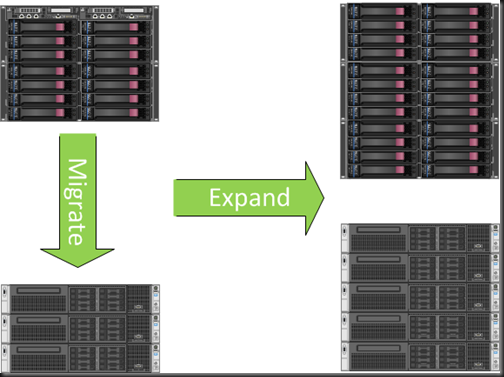 With this solution you can grow the environment.  The cluster in a box becomes a dedicated storage platform, and you can add disk to it.  Your single Hyper-V cluster can scale well beyond the 2 node limit of the cluster in a box.  And you can do that without any service downtime … well, that’s what I think at the moment

We’ll find out more in the future, I guess.