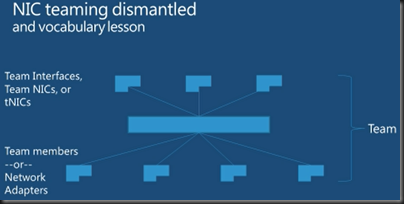 Most people don’t know the teaming mode they select when using OEM products.  MSFT are clear about what teaming does under the cover.  Connection mode = how do you connect to the switch?

There are 2 switch dependent modes: 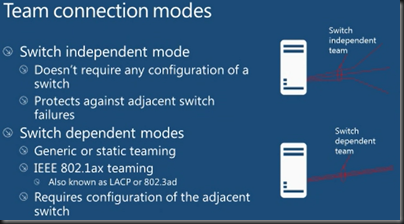 You also need to know how you will spread traffic across the team members in the team.

2) We also have Hyper-V Port, where it hashes the port number on the Hyper-V switch that the traffic is coming from.  Normally this equates to per-VM traffic.  No distribution of traffic.  It maps a VM to a single NIC.  If a VM needs more pipe than a single NIC can handle then this won’t be able to do it.  Shouldn’t be a problem because we are consolidating after all.

Maybe create a team in the VM?  Make sure the vNICs are on different Hyper-V Switches.

Remember that SR-IOV bypasses the host stack and therefore can’t be teamed at the host level.  The VM bypasses it.  You can team two SR-IOV enabled vNICs in the guest OS for LBFO.

Outbound traffic in Address Hashing will spread across NICs. All inbound traffic is targeted at a single inbound MAC address for routing purposes, and therefore only uses 1 NIC.  Best used when:

All traffic from each VM is sent out on that VM’s physical NIC or team member.  Inbound traffic also comes in on the same team member.  So we can maximise NIC bandwidth.  It also allows for maximum use of VMQs for better virtual networking performance.

Sends on all active members by using one of the hashing methods.  Receives on all ports – the switch distributes inbound traffic.  No association between inbound and outbound team members.  Best used for:

Best performance for both inbound and outbound.

Sends on all active members using the hashed port – 1 team member per VM.  Inbound traffic is distributed by the switch  on all ports so there is no correlation to inbound and outbound.  Best used when:

When using Hyper-V you will normally want to use Switch Independent & Hyper-V Port mode.

When using native physical servers you’ll likely want to use Switch Independent & Address Hash.  Unless you have a policy that can’t tolerate a switch failure.

There are different ways of interfacing with the team:

Inbound traffic passes through to one team interface at once.

A new team has one team interface by default.

Get-NetAdapter: Get the properties of a team interface

You can have team members in active or standby mode.

You also have to allow teaming in a vNIC in Advanced Properties – Allow NIC teaming.  Do this for each of the VM’s vNICs.  Without this, failover will not succeed.

The UI is actually using POSH under the hood.  You can use the NIC Teaming UI to remotely manage/configure a server using RSAT for Windows 8.  WARNING: Your remote access will need to run over a NIC that you aren’t altering because you would lose connectivity.

NIC teaming works with almost everything:

TCP Chimney Offload, RDMA and SR-IOV bypass the stack so obviously they cannot be teamed in the host.

That’s a lot of quad port NICs.  Good luck with that!

An alternative to a team in an SMB 3.0 scenario.  Can use multiple NICs with same connectivity, and use multiple cores via NIC RSS to have simultaneous streams over a single NIC (RSS) or many NICs (teamed, not teamed, and also with RSS if available).  Basically, leverage more bandwidth to get faster SMB 3.0 throughput.

Without it, a 10 GbE NIC would only be partly used by SMB – single CPU core trying to transmit.  RSS makes it multi-threaded/core, and therefore many connections by the data transfer.

Remember – you cannot team RDMA.  So another case to use Multichannel and get an LBFO effect is to use SMB Multichannel …. or I should say “use” … SMB 3.0 turns it on automatically if multiple paths are available between client and server.

Multichannel will only use NICs of same speed/type.  Won’t see traffic spread over a 10 GbE and a 1 GbE NIC, for example, or over RDMA-enabled and non-RDMA NICs.

Teaming allows for faster failover.  MSFT recommending teaming where applicable.  Address-hash port mode with Multichannel can be a nice solution.  Multichannel will detect a team and create multiple connections over the team.

If RDMA is possible on both client and server then SMB 3.0 switches over to SMB Direct.  Net monitoring will see negotiation, and then … “silence” for the data transmission.  Multichannel is supported across single or multiple NICs – no NIC teaming, remember!

Note that Multichannel over a team of NICs is favoured over multichannel over the same NICs that are not in a team.  Added benefits of teaming (types, and fast failover detection).  This applies, whether the NICs are RSS capable or not.  And the team also benefits non-SMB 3.0 traffic. 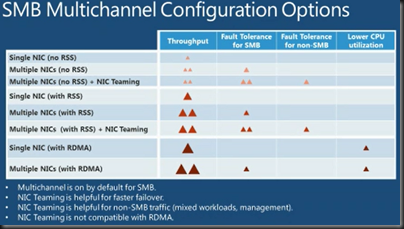 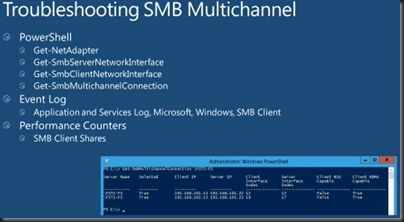 Plenty to think about there, folks!  Where it applies in Hyper-V?