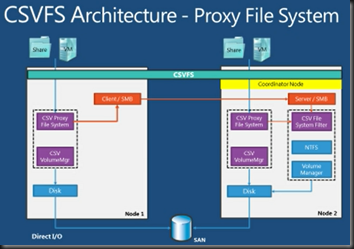 Appears as CSVFS instead of NTFS in disk management.  NTFS under the hood.  Enabled applications and admins to be CSV aware.

No opt-in any more.  CSV enabled by default.  Appears in normal storage node in FCM.  Just right click on available storage to convert to CSV.

CSV enables fault tolerance file handles.  Storage path fault tolerance, e.g. HBA failure.  When a VM opens a VHD, it gets a virtual file handle that is provided by CSVFS (metadata operation).  The real file handle is opened under the covers by CSV.  If the HBA that the host is using to connect the VM to VHD fails, then the real file handle needs to be recreated.  This new handle is mapped to the existing virtual file handle, and therefore the application (the VM) is unaware of the outage.  We get transparent storage path fault tolerance.  The fault tolerant SAN connectivity (remember that direct connection via HBA has failed and should have failed the VM’s VHD connection) is re-routed by Redirected IO via the Orchestrator (CSV coordinator) which “proxies” the storage IO to the SAN. 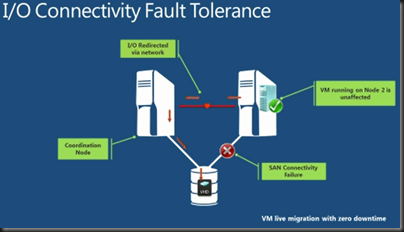 If the Coordinator node fails, IO is queued briefly and the orchestration role fails over to another node.  No downtime in this brief window.

If the private cluster network fails, the next available network is used … remember you should have at least 2 private networks in a CSV cluster … the second private network would be used in this case.

This should allow for much bigger CSVs without chkdsk concerns.

This is a distributed write-through cache.  Un-buffered IO is targeted.  This is excluded by the Windows Cache Manager (buffered IO only).  The CSV block cache is consistent across the cluster.

You configure the memory for the block cache on a cluster level.  512 MB per host appears to be the sweet spot.  Then you enable CSV block cache on a per CSV basis … focus on the read-performance-important CSVs.

This is new in WS2012 and provides a much faster redirected IO during storage path failure and redirection.  It is still using SMB.  Block level redirection goes directly to the storage subsystem and provides 2x disk performance.  It bypasses the CSV subsystem on the coordinator node – SMB redirected IO (metadata) must go through this. 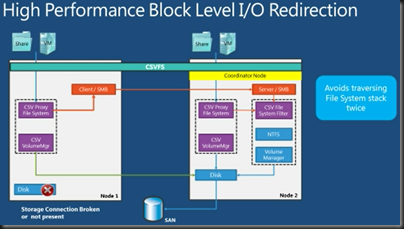 You can speed up redirected IO using SMB 3.0 features such as Multichannel (many NICs and RSS on single NICs) and RDMA.  With all the things turned on, you should get 98% of the performance of direct IO via SMB 3.0 redirected IO – I guess he’s talking about Block Level Redirected IO.

If your array can handle it, you could (and probably won’t) have 4,000 VMs on a 64 node cluster with a single CSV.

Summary: We get a single application consistent backup snapshot of multiple VMs across many hosts using a single VSS snapshot of the CSV.  The VSS provider is called on the “backup node” … any node in the cluster.  This is where the snapshot is created.  Will result in less data being transmitted, fewer snapshots, quicker backups. 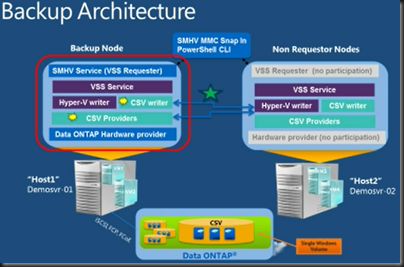