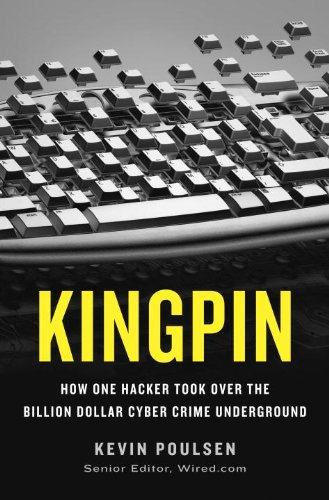 I just started reading this book during lunch today – when possible, I like to get out of the office for an hour to do something that is not at the desk.

There’s been a lot of movies, TV shows, and books about hacking.  I imagine that it isn’t a world full of bikini-clad babes clicking on a mysterious Pi symbol on The Net, or people with multi-coloured pencils in their hair typing out >Go Hack Now with instantaneous results.  The description of this book, Kingpin, got me interested.  It’s a story with the insider’s perspective:

In a previous life, Poulsen served five years in prison for hacking. So the Wired senior editor and "Threat Level" blogger knows intimately the terrain he explores in this page-turning tale of the criminal exploits of a hacker of breathtaking ambition, Max Butler, who stole access to 1.8 million credit card accounts. Poulsen understands both the hows of hacking, which he explains clearly, as well as the whys, which include, but also can transcend, mere profit. Accordingly, his understanding of the hacking culture, and his extensive interviews with Butler, translates into a fascinating depiction of a cybercriminal underworld frightening in its complexity and its potential for harm, and a society shockingly vulnerable to cybercrime. The personalities, feuds, double dealing, and scams of the hackers are just one half of this lively story. The other half, told with equal verve, is law enforcement’s efforts to find and convict Butler and his accomplices. (Butler is now serving a 13-year sentence and owes .5 million in restitution.) Poulsen renders the hacker world with such virtual reality that readers will have difficulty logging off until the very end.

But the question remains – does the president get saved in 24 hours?  I’ll post a review when I’ve finished reading it.