The official TechNet content is a bit scattered about so I through I’d reorganise it and consolidate to make stuff easier to find.  The software requirements of Virtual Machine Manager (VMM/SCVMM) 2012 are easy:

There’s a significant change for the database.  SQL Express is no longer supported.  You will need to migrate the VMM database to one of the supported versions/editions:

Here’s the system requirements for VMM 2012: 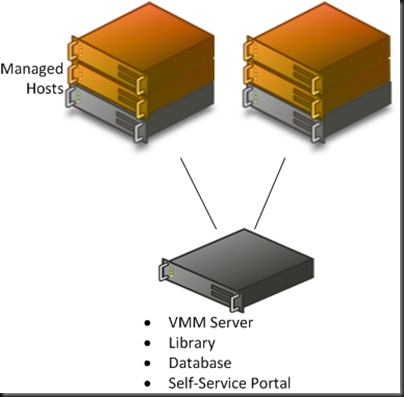 You can run all of the VMM roles on a single server with the following hardware configuration:

Although you can run all the components on a single server, you may want to split them out onto different servers if you need VMM role fault tolerance.  You’re looking at something like this if that’s what you want to do:

A dedicated SQL server will require:

If all you want is hardware fault tolerance for VMM then the simple solution is to run VMM in a highly available virtual machine.  I don’t like System Center being a part of a general production Hyper-V cluster.  That’s because you create a chicken/egg situation with fault monitoring/responding.  If you want to virtualise System Center then consider setting up a dedicated host or cluster for the VMM, OpsMgr, ConfigMgr VMs.  DPM is realistically going to remain physical because of disk requirements.

It is recommended that you:

The VMM server requirements are:

The database server requirements are:

The software requirements are:

Managing up to 150 hosts will require:

Managing over 150 hosts will require:

Supported Hyper-V hosts are below.

Please note that the following are not listed as supported:

In the beta, Windows Server 2008 is not supported.

Supported VMware hosts are listed below.  They must be managed by vCenter Server 4.1.

There is no mention of vSphere/ESXi 5 at the moment.  That’s understandable – both VMM and the VMware v5 product set were being developed at the same time.  Maybe support for v5 will appear later.

Citrix XenServer 5.6 FP1 can also be managed as standalone hosts or as Resource Pools if you deploy the Microsoft SCVMM XenServer Integration Suite to your hosts.

The requirements for being able to use VMM 2012 to deploy Hyper-V hosts to bare metal machines are:

A dedicated WSUS root server, running WSUS 3.0 SP2.  It cannot be a downstream server because that is not supported.  There will be a lot of processed updates so this may require a dedicated server (possible a VM).  If you install WSUS on a VMM server cluster then you must install the WSUS Administrator Console on each node in that cluster.