System Center Virtual Machine Manager can be integrated into System Center Operations Manager.  Using the information gathered by OpsMgr agents on hosts, virtual and physical machines you can gather information that is relevant to VMM:

You can see the reports above that are available when you are using Virtual Machine Manager 2008 R2.

Host utilization is a report you will run to see what the current resource usage is on that host.  Host utilization growth is similar.  What you will do with that report is specify two time frames.  The utilisation of the host in the second time frame will be compared with that of the first.

Virtual Machine Allocation is a summary report of the total resources used by virtual machines on your managed hosts.  Virtual Machine utilisation give you more detail. 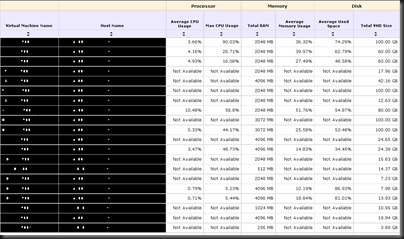 You can see in this screenshot the utilisation of resources by specific virtual machines.  Note that I have blacked out the VM names and the host names.  Some of the VM’s also do not have OpsMgr agents and therefore are not producing performance stats that can be used in this report.

Finally you have the report that’s going to be popular with most virtualisation implementations.  If I was doing a traditional internal deployment of Hyper-V I would first deploy OpsMgr 2007 R2 and it’s agents to gather Windows Server performance information.  Next I would deploy VMM 2008 R2.  I would let them stew on information for a week before sizing the hosts.  Then I would run the last of the reports: Virtualization Candidates.

With this report you specify a time frame and a set of criteria.  I’ve blacked out the names of the physical machines in this report.  You’ll use these performance criteria to dictate what is acceptable for a virtual machine candidate:

From this report you can ID your P2V candidates and then use VMM to convert those physical machines to virtual machines.

One thought on “VMM Reporting”