Odds are you’ve already read about this on Ben Armstrong’s blog (I’ve been engaged on an intense deployment project with little time to keep the blog up to date), but it’s worth me posting just in case.  Microsoft showed off Windows Server 8 (2012? MSFT have a thing against the number 13 so I doubt it will be Windows Server 2013) for the first time and featured Hyper-V.  Hyper-V Replica was on show, allowing a VM to be replicated to another (possibly remote) Hyper-V host.

The video is online and you can jump to around the 37 minute mark to start hearing about Windows 8.

It seems we have two authentication methods for the replication:

File this under “we’ll learn more at/after the Build Conference in September”.

An interesting screen shot is this one: 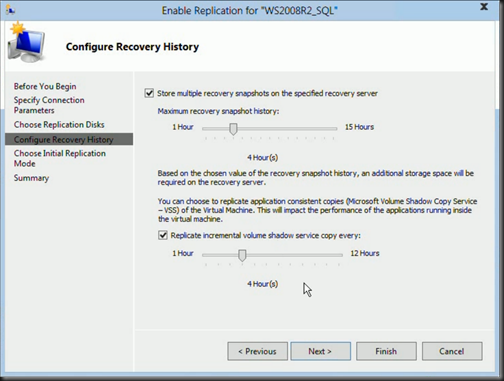 Cool: we can optionally keep a history of replicas!  Maybe a VM’s OS or application corrupts in site A but we can restore a previous version in site B before the corruption started?  And it appears to allow us to use VSS to take snaps every X hours to get consistent replicas.  That’s critical for things like Exchange or SQL Server.

A big challenge for replication is getting that first big block of data over the WAN.  MSFT has thought of that, as you can see below.  We can schedule it for out of hours, export to removable media and import on the destination host, or use backup/restore (apparently). 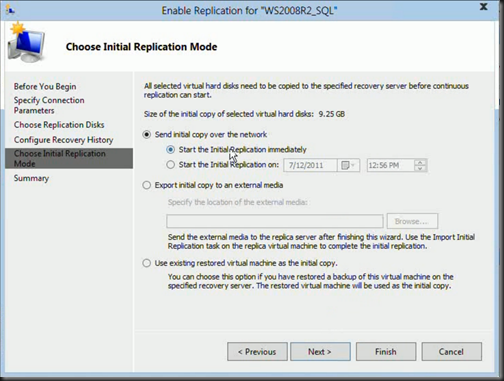 This is just a simple wizard to get something complex (under the hood) to work.  And it’s software based so it should work with any Hyper-V supported hardware.

This was a very early build on show at WPC11 so things are subject to change.  We’ll learn more, I guess, at/after the Build conference.  Until then, everything is speculation so don’t plan your deployments until at least the RC release next year!

WPC is Microsoft’s conference for partners.  The delegates tend to be executives or account managers from the Microsoft partner community, and the content is not the usual technical level one should expect from an MMS or TechEd.

Yesterday Microsoft announced some Hyper-V features from Windows 8 (Windows Server 2012?).  The first was that Hyper-V “3.0” will support “more than” 16 vCPUs per VM.  That’s a nice add on for those larger VM’s, giving us 16+ simultaneous threads of execution.  People are virtualising larger workloads as well as the usual/expected lighter ones because virtualisation offers solutions to more than just power/rack consolidation, e.g. fault tolerance.  A bottleneck has been the ability to run larger multi-threaded workloads, and Windows Server “2012” Hyper-V will give us a potential solution for this.

One of the big reasons we adopt virtualisation is the ability to make DR (disaster recovery or business continuity) easier.  Mid-to-enterprise businesses can afford really expensive SAN/WAN solutions for this.  There’s a number of storage or backup replication solutions that can allow replication of virtual workloads over smaller lines for the small-medium enterprise (SME).  Some are good, and some are downright rubbish to the point of being dangerous.

Microsoft is stepping in with a new feature called Hyper-V Replica.  This will give us the ability to replicate VMs asynchronously.  This means it will work over longer distances, with lower capacity lines, higher latency, and will be cheaper.  It also means that there is a slight delay in replication of VM data.  That’s unacceptable to a small set of the market who have regulatory/business needs for synchronous replication and will have to continue to look at those third party or expensive SAN/WAN replication solutions.

Thinking about Hyper-V Replica makes me wonder if there are other new features/upgrades that we haven’t been told about yet.  This isn’t DFS-R as we know it.  DFS-R requires a file to be closed before it can analyse it and replicate the change blocks.  Maybe we have a new DFS-R but I’m sceptical of that.  Maybe we have a “new” transactional file system?  I say “new” because Microsoft has had a transactional file system for quite some time in the form of WinFS.  This would allow the file system to track changes, and replicate them, all while keeping VMs in a consistent state in source and destination locations.  Consistency is one of those things that has worried me in third party software based replication of VMs because they are unaware of things like in-VM database commits.  Maybe a new WinFS could be aware?  Potentially it could work in cluster-cluster replication (no mention of that in the reports I read this morning from WPC).

Good news: Hyper-V Replica will be a built-in feature with no extra charges, unlike something else we could mention

I think that’s enough hot air and methane blown into the atmosphere for today.

The conspiracy theories started a few weeks ago when Veeam started to advertise on my (mainly MS infrastructure, featuring MS Hyper-V) blog.  Then we saw a countdown clock for a big announcement on the first day of TechEd USA 2011.  1 hour into the keynote, Veeam made their announcement:

Veeam is a name that is almost synonymous with VMware.  Many would consider that if you buy VMware then you buy Veeam.  With this new offering for Hyper-V, and with cluster support, you have to think that more than a few Hyper-V architects are considering the wider set of options that are now available to them.