I posted earlier today about my network transfer tests on HP ProLiant BL460C G5 blade servers with Windows Server 2008 R2 Hyper-V.  Hans Vredevoort also did some tests, this time using BL460C G6 blades.  This gave Hans the hardware to take advantage of some of the new technologies from Microsoft.  Check out his results.

Windows Server 2008 R2 includes some enhancements to optimise how networking works in Hyper-V.  I’m going to have a look at some of these now.

Here’s the way things worked in Windows Server 2008.  The NIC (bottom left) runs at the hardware level.  VM1 has a virtual NIC. 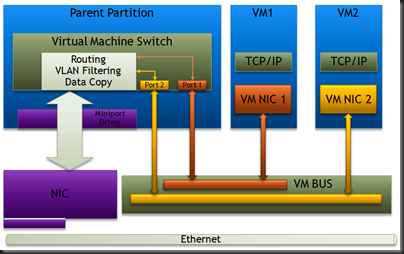 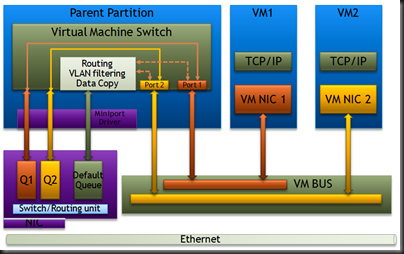 How it works now is that the NIC, i.e. the hardware, handles the workload on behalf of the parent partition.  Hardware performs more efficiently than software.  All that routing, filtering and data copy is handled by the network card in the physical host.  This does rely on hardware that’s capable of doing this.

TCP is pretty chatty.  Data is broken up and converted into packets that must be acknowledged by the recipient.  There’s an over head to this with the data being encapsulated with flow, control and routing information.  It would be more efficient if we could send fewer packets that contained more data, therefore with less encapsulation data being sent. 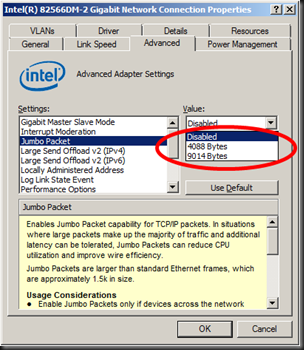 Jumbo Packets accomplish this.  Microsoft claims that you can get packets that contain 6 times more information with this turned on.  It will speed up large file transfers as well as reduce CPU utilisation.

This one has been around for a while with Windows but is support for Hyper-V was added with Windows Server 2008 R2. 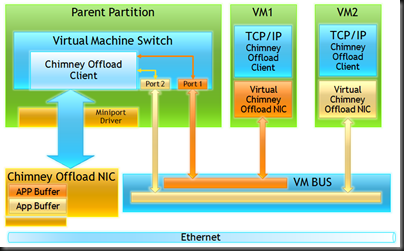 It’s similar to VMQ, requiring hardware support, and does a similar job.  The NIC is more involved in doing the work.  Instead of offloading from the parent partition, it’s offloading from the Virtual Machine’s virtual NIC.  The virtual NIC in the VM advertises connection offload capabilities.  The virtual switch in the parent partition offloads child partition TCP connections to the NIC.

You need support from the hardware for these features.  During the RC release, the following NIC’s were included by MS in the media:

Hans Vredevoort asked what sort of network speed comparisons I was getting with Windows Server 2008 R2 Hyper-V.  With W2008 R2 Hyper-V you get new features like Jumbo Frames and VMQ (Virtual Machine Queue) but these are reliant on hardware support.  Hans is running HP G6 ProLiant servers so he has that support.  Our current hardware are HP G5 ProLiant servers.  I decided this was worth a test.

I set up a test on our production systems.  It’s not a perfect test lab because there are VM’s doing their normal workload and thing like continuous backup agents running.  This means other factors that are beyond my control have played their part in the test.

There were three tests.  In each one I would copy the file 3 times to get an average time required.

Scenario 1: Virtual to Virtual on the Same Host

I copied the ISO from VM1 to VM2 while both VM’s were running on host one.  After I ran this test I realised something.  The first iteration took slightly longer than all other tests.  The reason was simple enough – the dynamic VHD probably had to expand a bit.  I took this into account and reran the test.

I repeated the tests.  The times (seconds) taken were 52, 54 and 66 with an average of 57.333 seconds.  We appear to have added 5.333 seconds to the operation by introducing physical hardware transitions.

Note that Live Migration is routed via a different physical NIC than the virtual switch.

This time I would copy the ISO file from one parent partition to another, i.e. from host 1 to host 2 via the parent partition NIC.  This removes the virtual NIC, virtual switch and the VMBus from the equation.

The times (seconds) taken were 34, 28 and 27 with an average of 29.666 seconds.  This makes the test scenario physical data transfer 22.334 seconds faster than the fastest of the virtual scenarios (scenario 1).

As I mentioned, these tests were not done in lab conditions.  The parent partition NIC’s had no traffic to deal with other than an OpsMgr agent.  The Virtual Switch NIC’s had to deal with application, continuous backup, AV and OpsMgr agent traffic.

It should also be noted that this should not be a comment on the new features Windows Server 2008 R2 Hyper-V.  Using HP G5 hardware I cannot avail of the new hardware offloading improvements such as VMQ and Jumbo Frames.  I guess I have to wait until our next host purchase to see some of that in play!

This is just a test of how things compare on the hardware that I have in a production situation.  I’m actually pretty happy with it and I’ll be happier when we can add some G6 hardware.

Microsoft released lots of updates for Operations Manager over the last couple of weeks.  There are lots of updates to management packs, too many for me to go posting them at this time of night.  Have a look on the catalogue and you’ll see them.  Or check your console if you’re using OpsMgr 2007 R2.

The following tools and updates are provided within this update which may be specific to a scenario:

For a list of fixes and tools addressed by this update rollup, see KB971541.

This update is supported for application on System Center Operations Manager 2007 Service Pack 1 only.

This update must be applied to each computer that meets the following criteria:

Before applying this update it is strongly recommended that Operations Manager databases, Management Server, Report Server and Web Console roles be backed up.

To extract the files contained in this update and installation of the update on the Operations Manager roles above:

NOTE: To run this file on Windows Server 2008 you must run this file from a command prompt which was executed with the Run as Administrator option. Failure to execute this Windows installer file under an elevated command prompt will not allow display of the System Center Operations Manager 2007 Software Update dialog to allow installation of the hotfix”.

Upgrading your network operating system requires minimal network configuration and typically has a low impact on user operations. The upgrade process is straightforward, efficient, and allows your organization to take advantage of the improved security that is offered by the Windows Server 2008 and Windows Server 2008 R2 operating systems. This guide covers the process for upgrading domains and domain controllers, and how to add new domain controllers to existing Active Directory domains. It includes details about how to run Adprep.exe and resolve known issues and errors if they arise.

Cluster Shared Volume (CSV) is the shared storage system that can be used by multiple cluster members at once for storing and running virtual machines in a Hyper-V cluster.  CSV is specifically customised for Hyper-V and should not be used for anything else – you even have to agree to than to enable it.  That customisation means that things would change a bit.

VSS is the Volume Shadow Copy Service.  Using Hyper-V certified backup solutions like DPM you can backup the state of a virtual machine running in Hyper-V in a supported manner.  This is done at the host level.  That’s different to a file level backup that you would do with an agent installed in the VM.  That would be able to recover individual files.  The host level backup would be able to recover the entire VM back to the point of time that you did the backup.

There have been reports of issues.  For example, DPM 2007 R2 is not live migration aware.  You’ll have to wait until around April for DPM 2010 for a solution to that.  That only affects the snapshot backups.

A rollup package has been released by Microsoft for Windows Server 2008 R2 Hyper-V to resolve some issues with CSV and VSS.  Thanks to Hans Vredevoort (clustering MVP) for making me aware of this.  Article KB975354 fixes the following situations.

In this scenario, the error code 0x800423f4 occurs when you back up the virtual machine. Additionally, the following event is logged into the Hyper-V Virtual Machine Management Service event log:

In this scenario, the virtual machine backup operation fails.

In this scenario, some data is truncated from the application backup in the virtual machine. Therefore, this behaviour causes data loss.

In this scenario, the restore operation fails and the virtual machine may be corrupted”.

If you’re running a Windows Server 2008 R2 Hyper-V cluster and are still getting used to it then there’s some good news.  Here’s how I’ll approach this:

That should work.  And it’ll probably be your first opportunity to use Live Migration and VMM 2008 R2 Maintenance Mode in anger.  Think about it, when do you normally get to do server patching during the work day?  Now you can!