One of the most common queries I used to get on my old blog was “how do I convert Hyper-V disks?”.  Converting a VHD is easy enough.  In the Hyper-V console you shut down the VM, edit the disk, select a location for the new VHD.  Once that’s done you can rename the old disk and grant it’s old name to the new disk.  Start up the VM and it’s using the new disk.  Remember to remove the old disk to save disk space.

Before you even think about this you need to be sure you have enough space for the new disk of the desired type to be created.  How much space will it need?  Check how much data is on that disk (in the VM’s OS) and allow for another GB or two to be safe.  This applies to both the Hyper-V console and VMM.

VMM is a bit more elegant.  You shut down your VM, hopefully from the OS itself or via the IC’s, rather than just turn it off.  Then you edit the properties of the VM and navigate to the disk in question. 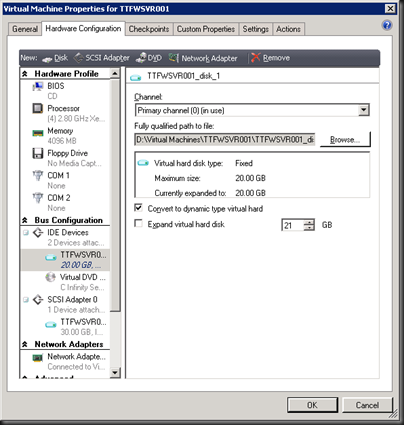 Here I have opened up the VM that I wanted to work on and I’ve navigated to the disk in question.  It’s a fixed VHD and I want to replace it with a dynamic VHD without losing my data.  You can see in the right-hand side that there is a tick box to convert the disk.  I ticked this and clicked on OK.

Notice that there is also a tick box for expand the VHD?  That’s how we can grant more space to a VM.  Remember to follow that up by running DISKPART in the VM to expand the volume.  That’s nothing to do with the convert task but I thought I’d mention it.

Once I clicked on OK the job runs.  How long this will take depends on the amount of data we’re dealing with.

VMM is pretty clever here.  It will convert the disk and then swap out the old disk with the new disk.  The old disk is removed.  This is a much less manual task than using the Hyper-V console. 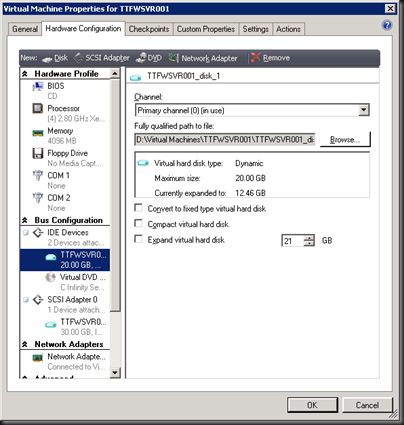 Once the job is done you should check out your VM.  You can see above that the disk is now a dynamic disk.  And notice how much space I’ve saved?  I’ve gone from 20GB down to 12.5GB.  I’ve just saved my employer 40% of the cost to store that VM with a couple of mouse clicks while waiting for my dinner.  That goes to back up my recent blog post about simpler and more cost effective storage.  And like I said then, I’ve lost nothing in performance because I am running Windows Server 2008 R2.

Cluster Shared Volume (CSV) is the shared storage system that can be used by multiple cluster members at once for storing and running virtual machines in a Hyper-V cluster.  CSV is specifically customised for Hyper-V and should not be used for anything else – you even have to agree to than to enable it.  That customisation means that things would change a bit.

VSS is the Volume Shadow Copy Service.  Using Hyper-V certified backup solutions like DPM you can backup the state of a virtual machine running in Hyper-V in a supported manner.  This is done at the host level.  That’s different to a file level backup that you would do with an agent installed in the VM.  That would be able to recover individual files.  The host level backup would be able to recover the entire VM back to the point of time that you did the backup.

There have been reports of issues.  For example, DPM 2007 R2 is not live migration aware.  You’ll have to wait until around April for DPM 2010 for a solution to that.  That only affects the snapshot backups.

A rollup package has been released by Microsoft for Windows Server 2008 R2 Hyper-V to resolve some issues with CSV and VSS.  Thanks to Hans Vredevoort (clustering MVP) for making me aware of this.  Article KB975354 fixes the following situations.

In this scenario, the error code 0x800423f4 occurs when you back up the virtual machine. Additionally, the following event is logged into the Hyper-V Virtual Machine Management Service event log:

In this scenario, the virtual machine backup operation fails.

In this scenario, some data is truncated from the application backup in the virtual machine. Therefore, this behaviour causes data loss.

In this scenario, the restore operation fails and the virtual machine may be corrupted”.

If you’re running a Windows Server 2008 R2 Hyper-V cluster and are still getting used to it then there’s some good news.  Here’s how I’ll approach this:

That should work.  And it’ll probably be your first opportunity to use Live Migration and VMM 2008 R2 Maintenance Mode in anger.  Think about it, when do you normally get to do server patching during the work day?  Now you can!

We know that VMware has a huge ecosystem of virtual appliances that run on their VMDK platform.  Microsoft has the VHD platform and thanks to the publication of integration components for Linux under GPLv2, we can expect something similar for Hyper-V.

Virtualboy posted about the launch of the Appliance Test Drive.  Microsoft has an existing library of trail products available.  Partners have joined in with trial and/or free products based on VHD:

EventTracker VHD
The VHD is a pre-configured, fully functional trial of EventTracker. This image comes with EventTracker including change monitoring and the EventTracker Event Portal, Event Log Central.

Check it out if you’re looking to evaluate some technology.  If you’re an ISV then you should consider this as a way to provide pre-configured evaluations to customers.  Part of the complexity for potential customers getting a trial working is figuring out those configurations.  If you are an ISV then you can remove that pain from introducing your product to a new customer.

This update is available via Microsoft Update.  Make sure you approve this update if you’re using WSUS, ConfigMgr or something else to control your updates.

There is also another update (KB976246) available for VMM 2008 R2 (only).  It deals with this issue: “When you remove a virtual hard disk from a virtual machine in System Center Virtual Machine Manager 2008 R2, the .vhd file on the Hyper-V server is deleted without warning”.

Again, the update is available via Microsoft Update.  After you install the hotfix you will get this warning every time you attempt to delete a VHD in VMM 2008 R2:

“You have chosen to remove virtual hard disks from virtual machine VMName. This action will delete the .vhd files.

Do you want to continue?”

I’m approving the updates now on our WSUS server to deal with these issues.

I’ve not been keeping up with my reading as of late.  I missed that this document from HP came out – I was distracted with actually deploying a Windows Server 2008 R2 Hyper-V cluster on HP ProLiant Blade Servers and HP EVA SAN storage instead of reading about it 🙂

This document appears to be essential reading for any engineer or consultant who is sizing, planning or deploying Windows Server 2008 R2 Hyper-V onto HP Blade servers and HP EVA, MSA or LeftHand storage.

It starts off with a sizing tool.  That’s probably the trickiest bit of the whole process.  Disk used to be easy because we normally would have used Fixed VHDs in production.  But now we can use Dynamic VHDs knowing that the performance is almost indistinguishable. The best process for disk sizing now is base it on data, not the traditional approach of how many disks do you need.  Allow some budget for purchasing more disk.  You can quickly expand a LUN, then the CSV and then the VHD/file system.  Next comes the memory.  Basically each GB of VM ram costs a few MB in overhead charges.  You need to also allow 2GB for the host or parent partition.  What that means is that a host with 32GB of RAM realistically has about 29GB available for VM’s. The HP tool is pretty cool because it will pull in information from Microsoft’s MAP.  The free Microsoft Assessment and Planning Toolkit for Hyper-V will scan your servers and identify potential virtualisation candidates.  This gives you a very structured approach to planning.

The document talks about the blade components and blade servers.  There’s 3 types of blade from HP.

What is really cool is that HP then gives you reference architectures:

There’s even a bill of materials for all this!  It’s a great starting point.  Every environment is going to be different so make sure you don’t just order from the menu.

It’s not too long of a document.  The only thing really missing is a setup guide.  But hey, that’s all the more reason to read my blog 😉