I first became an MVP with a Configuration Manager expertise.  It was kind of odd timing; I had done quite a bit of writing and blogging on it but not in a while; I’d actually moved on to Hyper-V at the time!  That was because I was working in the hosting space where there were no desktops to manage, and, well, hosters do everything on the “cheap” because it’s a dog-eat-dog world out there!

But I love ConfigMgr.  Sure it’s big, and yes you can sometimes find your head is swimming with all the options that it has.  But if you’re an IT megalomaniac like I am, then you’ll love having the ability to know everything about your infrastructure and be able to effect change whenever you want.  You can even do mad things like creating a recurring advertisement to play the sound of a nuclear explosion or kill OUTLOOK.EXE/NLNOTES.EXE on the PC of some user that has annoyed you … not that I would do that myself or recommend that you do it either!  It will leave an audit trail.  You’re better off using task scheduler or Remote Desktop Services Manager to do that sort of thing.

ConfigMgr 2012 will be out later this year and Jeff Wettlaufer has been recording some videos to demonstrate the functionality of it, including how the new user-centric features work.

Once you’re done there, head on over to Windows-Noob to see what Niall C. Brady (ConfigMgr MVP) has been writing on ConfigMgr 2012.  He’s been at it since beta 1.

Call it what you want, ConfigMgr v.Next, Configuration Manager 2011, but the beta has just been launched.  It brings a bunch of new stuff in what is not just a refresh:

I’ve already blogged about what I’ve seen so far.  This is a very exciting new release.  The last version seems to focus a lot on OS deployment.  This release is emphasising getting the right software to the end user, and allowing the end user to pull that software down on demand.  The demos are impressive.  Go check out the beta now.

Microsoft has released version 2 of the Configuration Manager 2007 toolkit.  You can read more about it here.  Basically, it’s a bunch of utilities help with administration and troubleshooting.

Remember that Microsoft Ireland is hosting a “best of MMS 2010” event next week on Monday the 17th.  Speakers from Ireland, Redmond and from MS UK will be presenting on some of the content from the show.  I’m most looking forward to the ConfigMgr, Service Manager and Opalis presentations.  MS UK is also running something similar so check out your local feeds.

In case you missed it in one of my MMS posts, the beta for ConfigMgr 2007 R3 is now public and is available on Connect.  I received the following in an email earlier today:

In addition to power management, ConfigMgr07 R3 will provide customers with enhanced scale and performance support (scale to 300K managed clients per hierarchy, delta AD discovery, dynamic collection updates), as well as enablement of further capabilities for operating system deployment. A full list of the R3 features can be found on Microsoft Connect at the “What’s new in R3” post”.

Anderson says that Windows Update updated 90million Windows 7 computers in March 2010.  This session will focus on management of the PC.  The role of the desktop administrator will change, involving cloud (that’s #1) and security.

As promised by Jeff Wettlaufer in a TechNet Edge video, Configuration Manager 2007 R3 is now in public beta (after a lengthy TAP).  Jeff comes on stage to show power management of R3.  This is all about learning about power usage, policy creation/enforcement, and reporting.

We see power consumption reporting being enabled on a collection.  A series of reports are viewed, e.g. the cost (local cost defined by you) of the power based on KwH.  That might be useful for servers.  Power management settings are also configured in the collection.  All the familiar ones are available from Windows 7.  You can define peak and non-peak as well as on battery and plugged in.  You can also define a wake-policy to tell a machine to power up, get some policy/updates and go back to sleep.  Now you run reports to see how you improved your power consumption, e.g. environmental impact.  You can quantify the savings from pre- and post-policy.  A report shows the types of activity that keep computers awake in relation to computers/monitors being active/asleep.  Handy for tuning policy or trying to figure out why something never powers down.

The CEO of 1E is featured in a video.  He couldnt’ travel because of the travel chaos.  MS missed a UC demo opportunity here.  1E is one of the biggest players in extending ConfigMgr functionality.  They’ve built upon the power management of ConfigMgr with a product called Night Watchman.  Claims it saves Dell $26/PC/year in power costs.

A distribution type for XenApp can be created in ConfigMgr Software Distribution.  New package and programs are created in there.  A advertisement is set up to install the package onto the XenApp servers.  Users get drained from the servers, the apps get installed and then users can log in.

Michael Kleef comes out to demo.  This is the first time non-NDA people get a demo as far as I know.  You can see a VM being started up with 1GB RAM and it will be able to grow to 3GB RAM.  Additional memory will be allocated as required and released back to the host when not required.  The current usage is shown in the Hyper-V console.  VMM will get an update to enable this management.

RemoteFX is aimed at VDI. The host has a high end graphics card.  This will be shared by Hyper-V VM’s on the host for graphics processing for the VDI machines.  A demo of 720P video is shown running on a remote VM.  Aero features like peek and flip are there.  The GPU does the work, not the CPU.  This is shown in Performance Monitor.

ConfigMgr allows you to eliminate a separate security infrastructure by integrating with ForeFront End Point Protection.  You don’t need new servers and you get an integrated console.  Updating, policy analysis, reporting were already there since the 2007 R1 release.

Demo: Forefront appears in ConfigMgr as a set of packages by default.  The install program has logic to be able to remove other AV solutions – just like Trend Micro has/had (it’s been a while).  A set of collections based on different states are created – allowing context sensitive advertisements.  A new Forefront node is created for policy creation.  Here you can configure scan preferences, exclusions, how to get updates (default is ConfigMgr), scheduled scans, etc.  You can then assign the policy to a collection.  Reports are available to show status breakdowns, infections, etc.

This is a tidy solution.  I still see lots of people not adopting it which is unfortunate.

He said “cloud”!  You know the drinking game rules: 1 shot – now!  OK – put the bottle down.  You’d already have alcohol poisoning if we played the MMS 2010 cloud drinking game.

Here’ comes Windows Intune.  See my previous launch post.  An admission that this is not nearly (not even way) as powerful as ConfigMgr.  However, it will be updated quite frequently.  It’s not a rival to ConfigMgr but it will be an alternative entry point to centralised management.

We get a very quick Windows Intune demo where we see update management.  We see something ConfigMgr doesn’t have – update automatic approval policies like WSUS has.

We hear how a corporation used the beta to create a CMDB (ITIL/MOF configuration manager database) that integrated many System Center databases into one.  That was done in 2 hours: a singe data warehouse for all configuration data.  Nice!

NOW Service Manager gets the welcome it should have.  Nicely done by the speaker :-)  The team deserves a lot of credit – they wrote a product, got bad feedback, scrapped it and started all over.  Not many will do that.

We get a demo on how Service Manager is used to assist with PCI compliance – stuff to do with credit card payments processing certification.  A library of 350 (!) compliance documents is built into the package.  You can pull from this.  The demo pulls documents to do with American Express.  Objectives are presented that IT will understand.  Now you work on them, update your progress and track your progress.  Some of this could be duplicated in other projects but Service Manager knows this and strips out redundant new steps.  There is integration into OpsMgr, ConfigMgr and AD.  Demonstration of compliance can be done using this too, making auditing much easier.

This is something I firmly believe in: we need to put some power back in the users hands, e.g. self service provisioning.  Whether it be OS deployment, virtual machine deployment, software deployment, etc.

ConfigMgr v.Next is demonstrated now.  It has some cool user focused stuff.

Desired Configuration Management (DCM) is shown.  It will have remediation, not just the current reporting feature.  In the demo, a file association no longer works.  That’s because someone has uninstalled it.  ConfigMgr uses a state to decide what software should be installed.  AT LAST!  This has been needed since SMS 0.0.  V.Next will remediate the state (software is assigned to the PC but missing) by reinstalling the software.  DCM can also remediate things like firewall, IE settings, etc.  Enabling the remediation is a simple tick box operation for the administrator.  Doh – the demo falls into the trap of trying to do things too quick in ConfigMgr.  ConfigMgr is not meant to be a hurried product.  Things in large enterprises take time.

The beta will be out in May.  Everything is re-rewritten to leverage the DCM state engine.  That’s the way it should be. 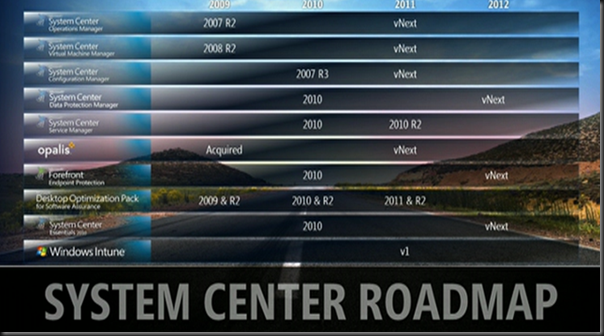 That was a keynote that had the content you want – lots of demos and lots of new stuff.  Nicely done!

The ConfigMgr 2007 Dashboard is a recently released free add-on from MS to allow you to quickly view the status of the most important items in your deployment.  The listed benefits are:

It had been a long time since I’d done any ConfigMgr work.  But recent lab work using a couple of deployments got me hooked with this uber powerful system.  It’s huge, can put it’s fingers (at your control) into everything, and puts you firmly in control.  Pair it with OpsMgr and the network is tamed like a wild horse.  The Dashboard will give you a customisable at-a-glimpse view of what is going on in ConfigMgr, just like you already can do with dashboards in OpsMgr.

Microsoft published a bunch of guides for engineers and administrators who work with ConfigMgr 2007:

Jett Wettlaufer posted a blog entry about the beta for the Configuration Manager Dashboard.  He includes a bunch of screenshots of the product in action with some data.  This gives people a quick visualisation of various statuses. 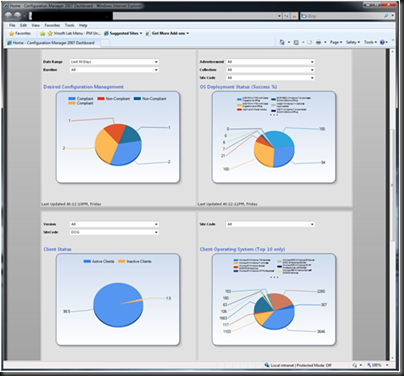 Jeff Wettlaufer recorded a cool (and short) video where he demonstrates how Intel vPro can make a helpdesk administrator’s job a lot easier and more efficient when combined with System Center Configuration Manager.  It includes demonstrations of power control over the LAN and wifi, and remote BIOS access.