You will have to be hiding under an “IT rock” to not know this: today, on January 14th, Microsoft is releasing their very last updates for Windows 7 to the public. Yes, after over 10 years of support, Windows 7 is now end-of-life.

Disclaimer: businesses can extend security fix availability for Windows 7 in one of two ways:

It’s hard to believe that Windows 7 became generally available 10 years and 3 months ago. It was still early in my active-in-the-community days. This was a time when Microsoft used to run public events, and technical people would promote their products. I was asked by the DPE/partner teams in Dublin to work with them on their Windows 7 “community launch” roadshow in 4 cities around Ireland: Belfast, Galway, Cork, and Dublin. Each event featured 1 or 2 business-focused shows during the day, and 1 consumer-focused show in the evening. I honestly don’t remember what Windows 7 stuff I talked about back then – it could have been MDT, I don’t recall. But I remember each event had a huge attendance – the free copy of Windows 7 Ultimate (it should have been a Home version but accidentally was announced and supplied as Ultimate at great cost to MS Ireland!) helped. But despite the big freebie, the interest was genuine and there was lots of interaction.

Windows 7 was a great OS. From the first time I used it, either Beta or Release Candidate, it was stable. I logged a bug with the wi-fi config assuming you were in the USA, which was acknowledged and resulted in a free copy of Windows 7 for me (along with one from the roadshow!). Uptake with businesses was slow – the eventual end-of-life for Windows XP resulted in lots of rushed deployments. Then along came the deeply unpopular Windows 8/8.1 and that meant that people stuck with Windows 7. Even today, businesses have held on tight, fearing the forever-frequently-upgrading model and different management of Windows 10. 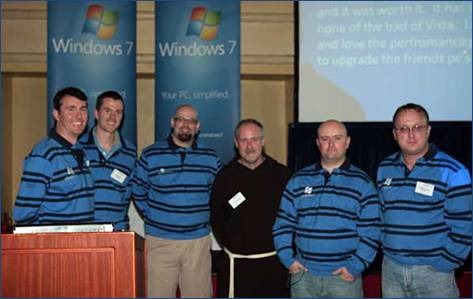 I’m actually feeling a little weird. It doesn’t feel like 10 years. On one hand, it feels like yesterday that I was hanging with the Windows 7 & Windows Server 2008 R2 launch team at a hotel in Galway, Belfast, or Cork. That’s us in the blue/black rugby jersey’s above, which had a 7 on the back. Dave moved into an enterprise role in Microsoft and has since left in recent years – he’s the one that got me involved in community stuff after I had been blogging for a while. Enda left Microsoft and emigrated with his family to live a great life in Norway. Wilbour moved to Microsoft in his native Canada and has since left the company. There’s me … And Patrick has since passed on. We literally presented that show on the seat of our pants. The demo lab build stated the night before in a hotel room in Galway, and I remember Patrick finishing his build behind the curtain while Dave was presenting! And that curry in the Indian Princess in Cork … Wilbour and I dared each other to eat the Chicken Phal. I think I needed 3-4 pints of beer to down it, and maybe some loo roll in the fridge. On the other hand, it feels like life has moved at lightspeed and so much has happened since then.

How could I forget … actually my work in Azure has me rarely signing into a customer’s OS anymore … but today is also the end of support for Windows Server 2008 and Windows Server 2008 R2. Wow! My first community involvement with Microsoft was the launch of W2008. Dave (above) ran a series of events during the beta/RC time period to bring IT pros up to speed on the new server OS. I was working with a “large” Irish hosting company as the senior Microsoft engineer, maintaining what was there and building a new VMware hosting platform – yeah, you read that right. I was invited to attend the sessions. Towards the end, Dave asked if anyone was interested in doing some community work. I volunteered and next thing I know, I was standing on the main stage with Dave and Mark (who now runs the Microsoft data centre tours in Dublin) for the launch of W2008. That was a mad day in the Pod nightclub in Dublin. There were three launch events in 1 day. Each had 3 session slots – a keynote presented by an Irish guy working in Redmond in Server marketing, and then two slots where you could attend different sessions. We were in the main hall and presented W2008 in slots 2 and 3, 3 times that day. I remember we had to time it perfectly … music would literally drown us out after 25 minutes so we had to be quick. That, and the fear of the crashes that plagued the local Vista launch, meant that all demos were recorded and editing was done to make the videos quicker. I think I talked about Server Core. I remember the install demo and saying how quick it was, and getting some laughs when I explained that it wasn’t as quick as the obviously edited video. And the following night was the first time that I hosted/presented at a user group community event in Dublin.

My big memory of the W2008 R2 launch was the roadshow we did in Dublin while it was still beta/RC to build up interest. By now, I was working for a different hosting company and was building a new hosting platform that would be based on W2008 R2 Hyper-V and System Center. It as another roadshow in Belfast, Galway, Cork, and Dublin, with the same gang as the previous Windows 7 one. I remember Dave build a Hyper-V lab using a couple of laptops and a 1 Gbps switch. He was so proud that he had a demo lab that didn’t rely on dodgy hotel wi-fi or phone signals. It worked fine in rehearsals, but Live Migration failed in every live demo, which Dave insisted on fixing in front of each audience. I was co-presenting with him. The Dublin event, in the Hilton by the Grand Canal, was crazy. Dave put his head down, waved at the audience and said “I’ll fix this”. Time was passing, so I decided to do “a dance” to entertain the crowd. When I say “dance” imagine the Umpalumpas dancing in Charlie & The Chocolate Factory.

Yes, time has moved on … 10+ years of it! And now Windows 7 is breathing its last hours as a fully supported OS. I sure hope that your desktop OS has moved on too.