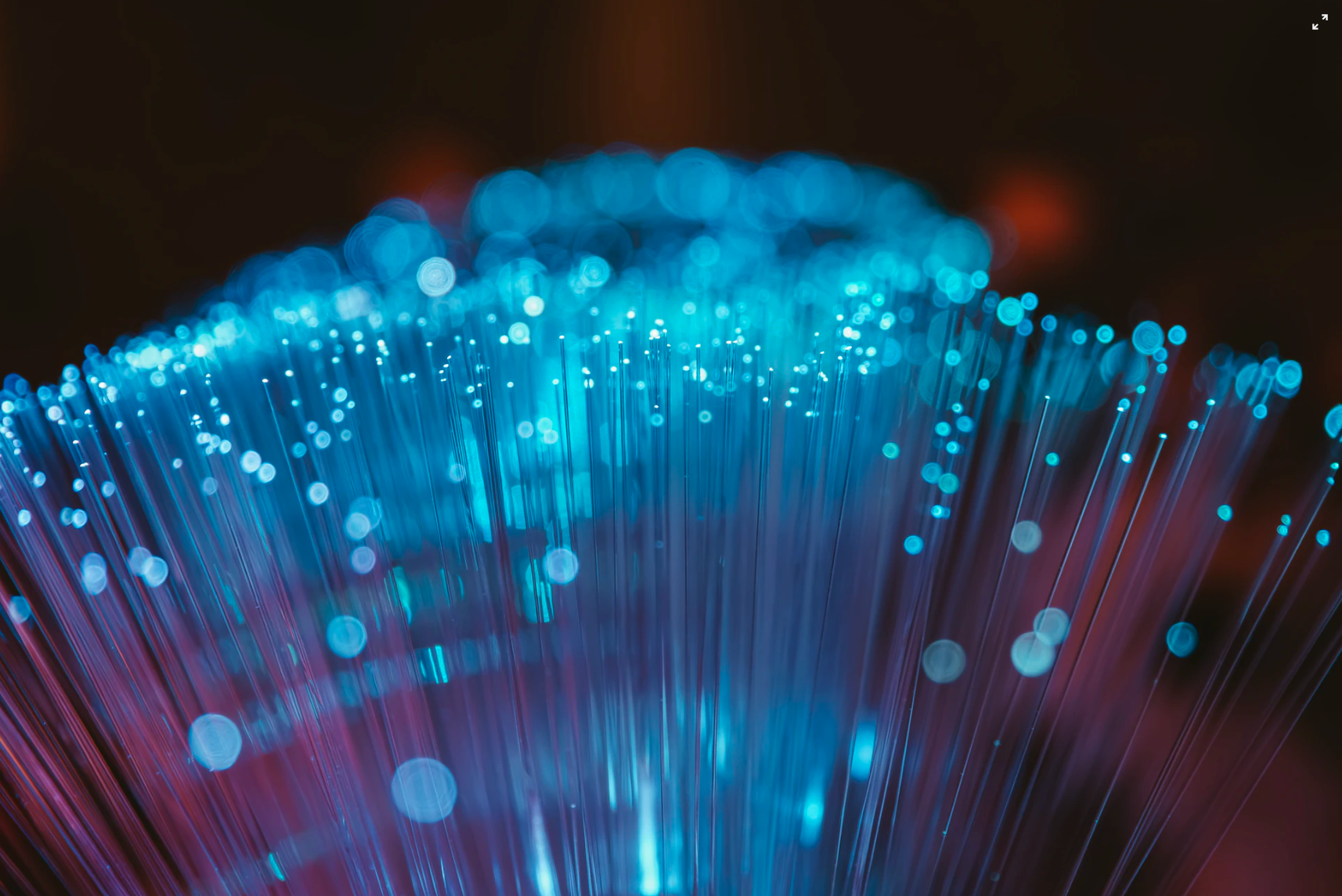 In this article, I want to explain how important BGP is in Azure networking, even if you do not actually use BGP for routing, and the major role it plays in hub-and-spoke architectures and deployments with a firewall.

I was never the network guy in an on-premises deployment. Those 3 letters, BGP, were something someone else worried about. But in Azure, the server admin becomes a network admin. Most of my work in Azure is networking now. And that means that the Border Gateway Protocol (BGP) is important to me now.

BGP is a means of propagating routes around a network. It’s a form of advertising or propagation that spreads routes to one or more destinations one hop at a time. If you think about it, BGP is like word-of-mouth.

A network, Subnet A, is a destination. Subnet A advertises a route to itself to a neighbour network, Subnet B. Subnet B advertises to its neighbours, including Subnet C, that it knows how to get to the original subnet, Subnet A. And the propagation continues. A subnet at the far end of the LAN/WAN, Subnet D, knows that there is another subnet far away called Subnet A and that the path to Subnet A is back via the propagating neighbour, Subnet C. Subnet C will then forward the traffic to Subnet B, which in turn sends the traffic to the destination subnet, Subnet A.

Whether you use BGP in your on-premises network or not, there will be a pretty high percentage chance that you will use BGP in Azure virtual networking – we’ll get to that in a few moments.

But BGP Is Used Without BGP

Let’s say that you are deploying a site-to-site VPN connection to Azure and that you do not use BGP in your configuration. Instead, you create a Local Network Gateway in Azure to define your on-premises networks. The virtual network gateway will load those networks from the Local Network Gateway and know to route across the associated VPN tunnel to get to those destinations.

And here’s where things get interesting. Those routes must get advertised around the virtual network.

Note: in this scenario, the hub is sharing the VNet gateway via peering, and the spoke is configured in peering to use the remote VNet gateway. 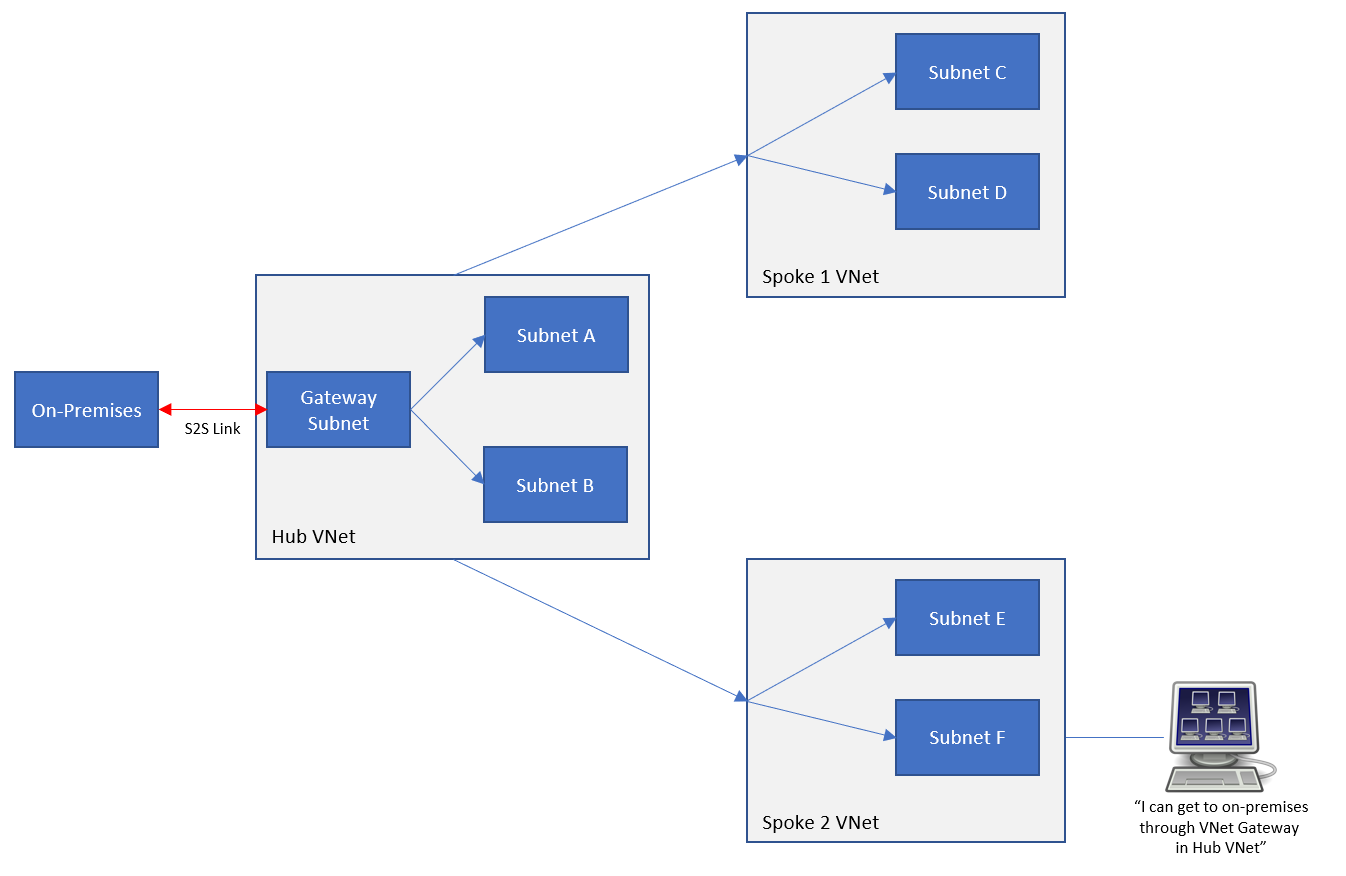 Routing is always a 2-way street. If routes only went one way, then a client could talk to a server, but the server would not be able to talk to the client.

If we have BGP enabled VPN or ExpressRoute, then Azure will propagate routes for the spoke subnets back down through peering and to the VNet Gateway. The VNet Gateway will then propagate those routes back to on-premises.

If you do not have BGP VPN (you are statically setting up on-premises routes in the Local Network Gateway) then you will have to add the address space of each spoke subnet to the on-premises VPN appliance(s) so that they know to route via the tunnel to get to the spokes. The simple way to do that is to plan your Azure networking in advance and have a single supernet (a /16, for example) instead of a long list of smaller subnets (/24s, for example) to configure.

Let’s say that you want to add a firewall to your hub. You want to use this firewall to isolate everything outside of Azure from your hub and spoke architecture, including the on-premises networks. You’ve done some research and found that you need to add a route table and a user-defined route to your hub and spoke subnets, instructing them that the route to on-premises is through the VNet Gateway.

Now you need to do some reading – you need to learn (1) how Azure routing really works (not how you think it works) and (2) how to troubleshoot Azure routing. FYI, I’ve been living in this world non-stop for the last 10 months.

What you will probably have done is configured your spokes with a route to 0.0.0.0/0 via the internal/backend IP address of the firewall. You are assuming that will send all traffic to anywhere via the Firewall. Under the covers, though, routes to on-premises are still propagating from the VNet Gateway to all the subnets in your hub and spoke architecture. If on-premises was 192.168.1.0/24 and your spoke machine wanted to route to on-premises, then the Azure network fabric will compare the destination with the routes that it has in a hidden route table – the only place you can see this is in Effective Routes in a VM NIC Azure resource. You have a UDR for 0.0.0.0/0 via the firewall. That’s a 0-bit match for any destinations in 192.168.1.0/24. If that was the only route in the subnet, then that route would be taken. But we are sending a packet to 192.168.1.x and that is a 24-bit match with the propagated route to 192.1681.0/24. And that’s why the response from the spoke resource will bypass the firewall and go straight to the VNet Gateway (via peering) to get to on-premises. That is not what you expected or wanted!

Note: the eagle-eyed person that understands routing will know that there will be other routes in the subnet, but they are irrelevant in this case and will confuse the explanation. 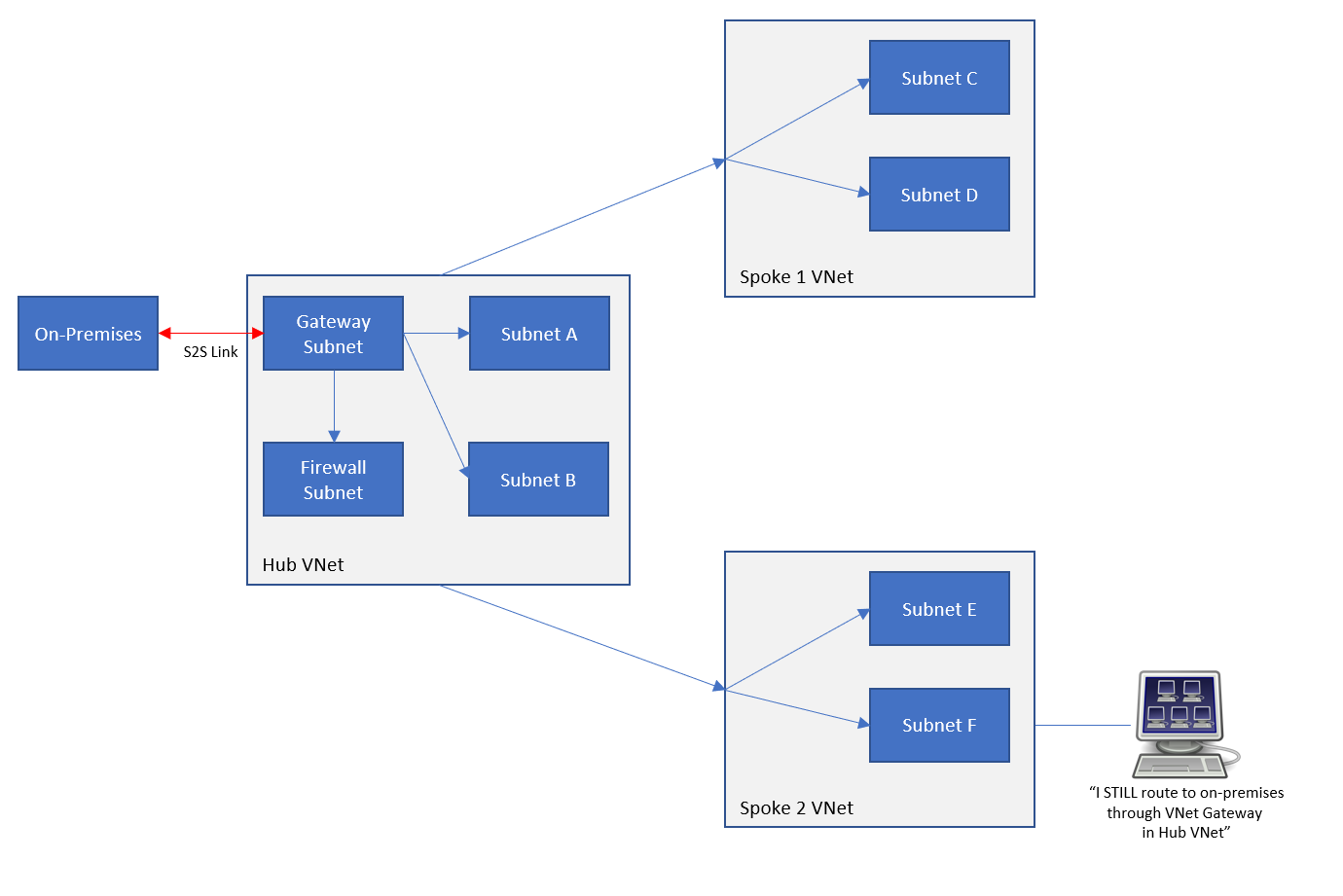 The following works even if you do not use BGP with a site-to-site VPN!

To solve this problem, we can stop propagation – we can edit the route table resources in the internal Azure subnets (or pre-do this in JSON) and disable BGP route propagation. The result of this is that the routes that the VNet Gateway were pushing out to other subnets will stop being propagated. Now if we viewed the effective routes for a spoke subnet, we’d only see a route to the firewall and the firewall is now responsible for forwarding traffic to on-premises networks to the VNet Gateway.

More work will be required to get the Gateway Subnet to route via the firewall, but that’s a whole other topic! We’re sticking to BGP and propagation here. 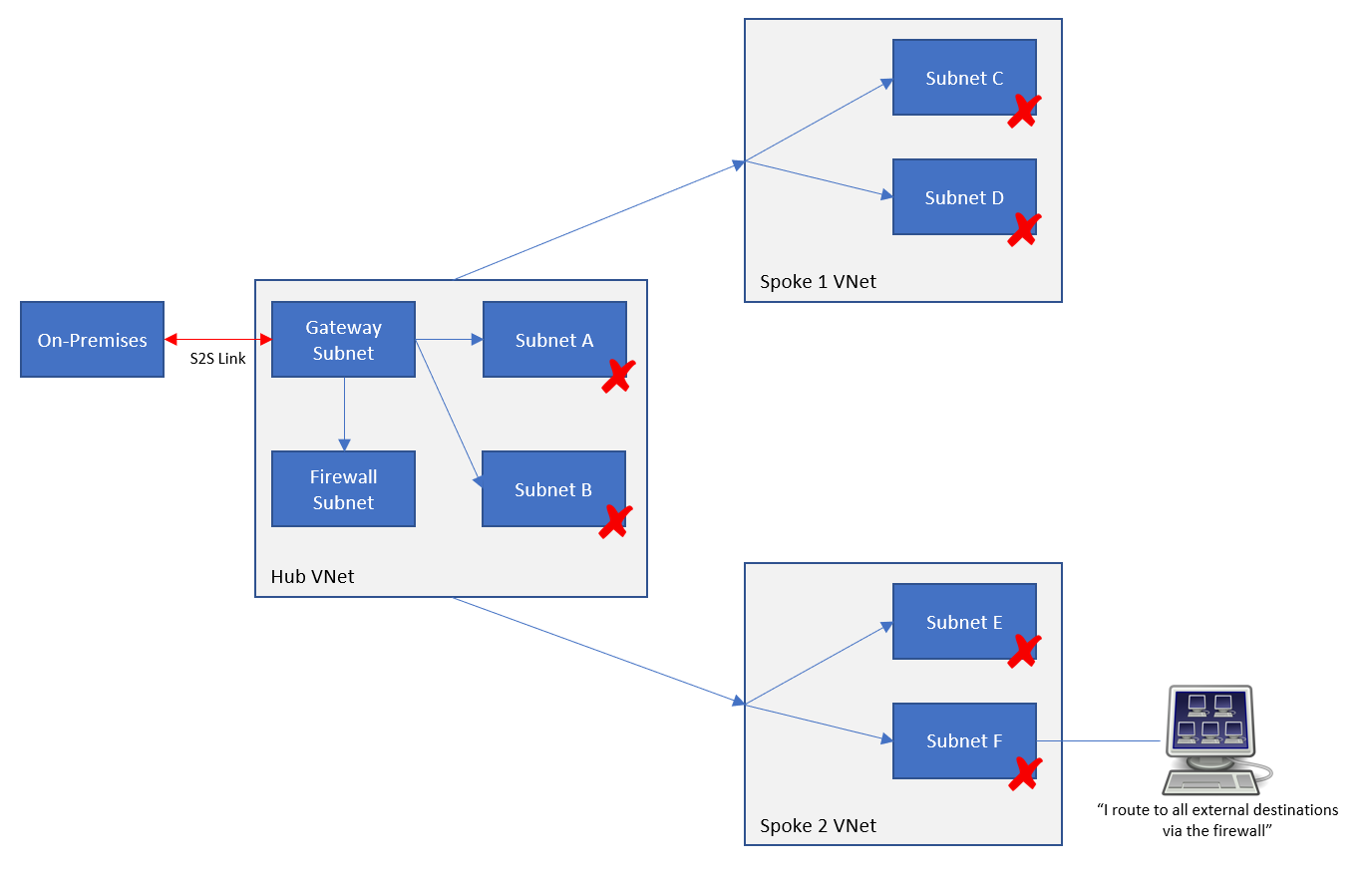 The Firewall and BGP Propagation

Let’s make a mistake, shall we? It will be useful to get a better understanding of the features. We shall add a route table to the firewall subnet and disable BGP route propagation. Now the resource in the spoke subnet wants to send something to an on-premises network. The local subnet route table instructs it to send all traffic to external destinations (0.0.0.0/0) via the firewall. The packets hit the firewall. The firewall tries to send that traffic out and … it has only one route (a simplification) which is to send 0.0.0.0/0 to Internet.

By disabling BGP propagation on the firewall subnet, the firewall no longer knows that the route to on-premises networks is via the virtual network gateway. This is one of those scenarios where people claim that their firewall isn’t logging traffic or flows – in reality, the traffic is bypassing the firewall because they haven’t managed their routing. 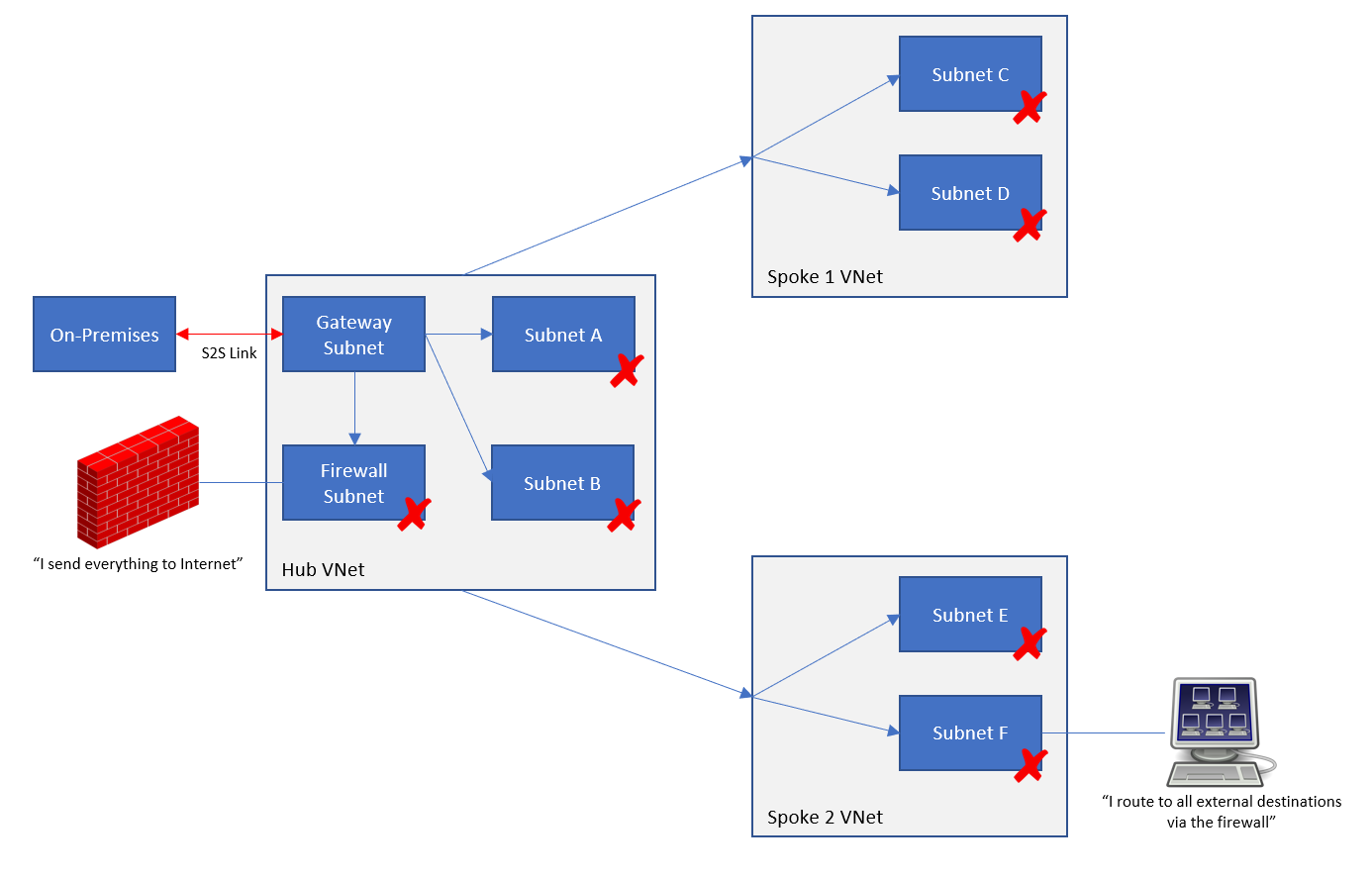 The firewall must know that the on-premises networks (a) exist and (b) are routes to via the VNet Gateway. Therefore, BGP propagation must be left enabled on the firewall subnet (the frontend one, if you have a split frontend/backend firewall subnet design). 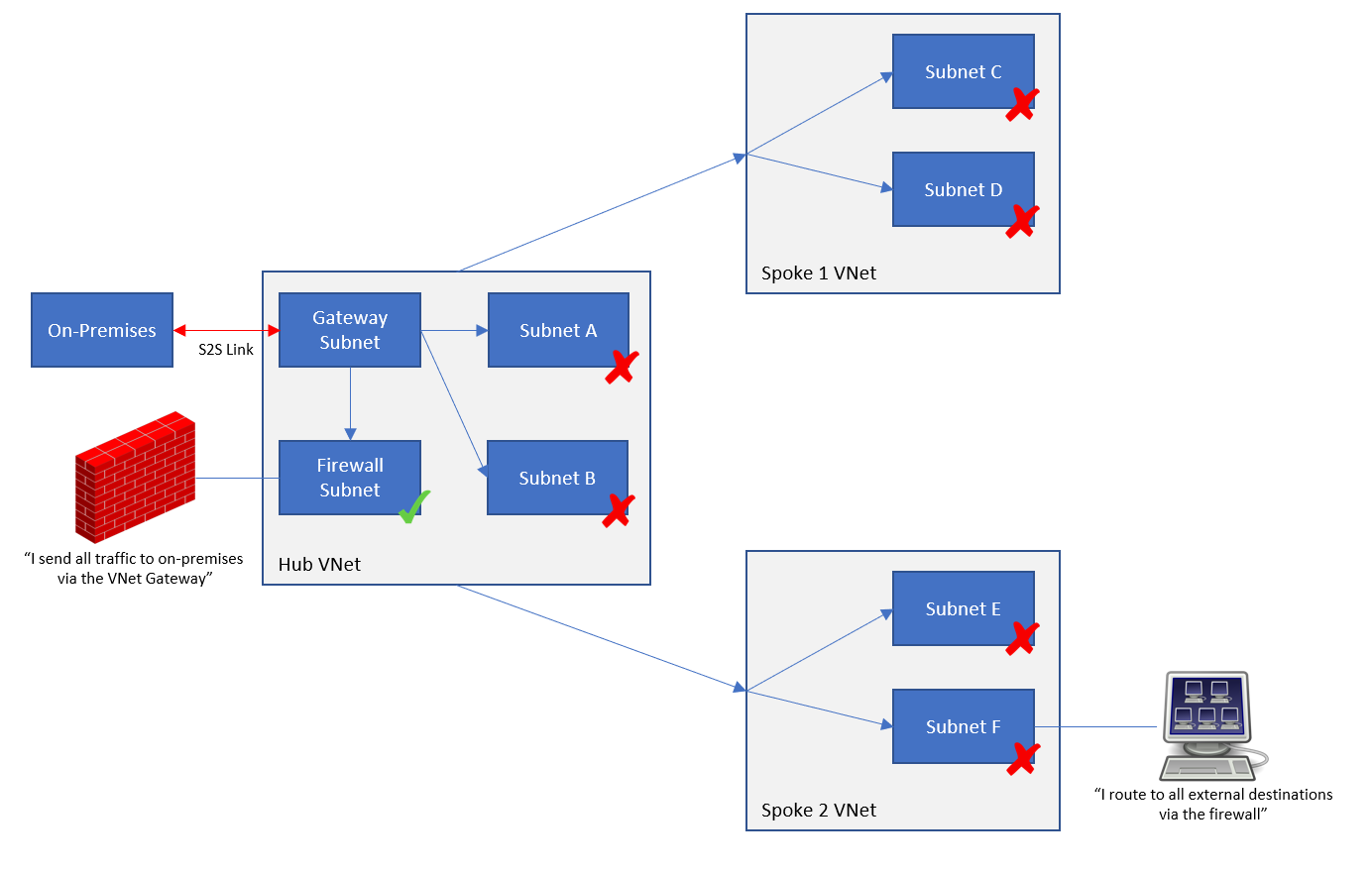 I’m not covering it here, but there are architectures where there might be other subnets that must bypass the firewall to get back to on-premises. In those cases, those subnets must also have BGP propagation left enabled – they must know that the on-premises networks exist and that they should route via the VNet Gateway.