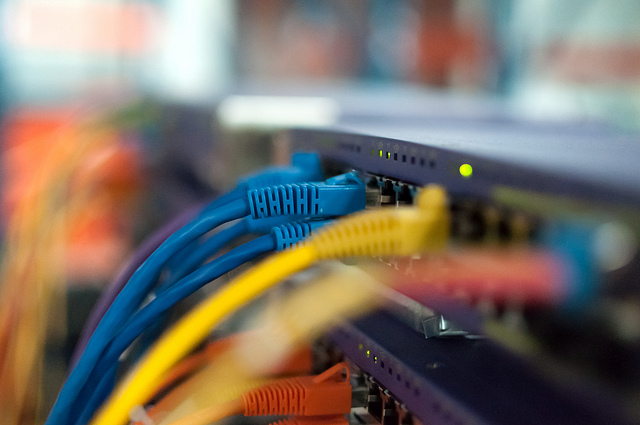 Read on if you want to learn how to connect Windows Server containers to an external virtual switch so that you don’t use NAT, and the containers actually talk directly to the LAN via DHCP assigned addresses. You’ll also see why a DHCP enabled container fails to get and address and ends up with a 169.254.x.x APIPA IPv4 configuration.

If you use Microsoft’s setup scripts for Windows Server 2016 (WS2016) Technical Preview 3 (TPv3), the default configuration for container networking is that each VM host will have virtual switch (in the VM), connected the VM’s vNIC. The virtual switch works in NAT mode, and uses a private network range to dynamically address containers that connect to the virtual switch. This set up requires each container to have NAT rules on the VM host so that external clients can connect to the services running in the containers. That … could be messy. In some terms, it could allow for huge network scalability (with tens of thousands of possible ports per VM host) but in others, it could be a nightmare to orchestrate.

Remember that there are two scripts that we can run to set up a VM host.

Install-ContainerHost.ps1 includes the option for a flag:

If you use method 2 then you could run Install-ContainerHost in the new VM host with the -UseDHCP flag set to $true; the behaviour of the script will change. By default it creates the VM host’s virtual switch in NAT mode. But enabling this flag creates an external virtual switch.

Instead I edit Install-ContainerHost. One small change will do the trick. Not far from the top is where the parameters are set as script variables. Look for a line that reads:

Modify this line so it reads: 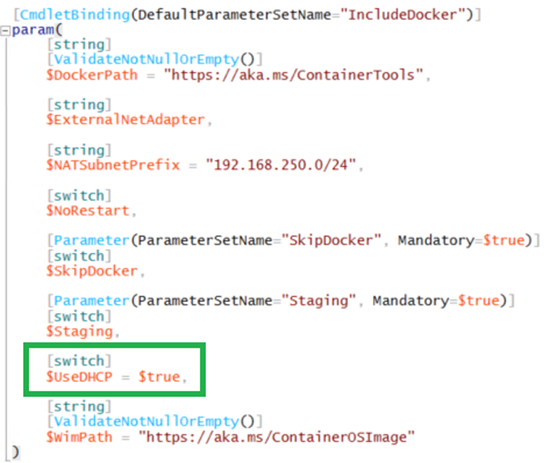 Now every time I either run Install-ContainerHost or New-ContainerHost I’ll get the DHCP networking configuration instead of NATing.

So try this to create/configure a VM host, create a container, use Enter-PSSession to connect to the container, run IPConfig and … viola, you’ll have no DHCP address. Say what?

I was stumped. I tried it again. Nothing. I asked for help and by the time I got home, I got a tip from one of the folks in Redmond. It proved to be my “I’m a moron” moment of the day. If I’d thought about it, DHCP is all about broadcasts and MAC addresses. I have a single VLAN set up in the lab so broadcasts wasn’t the issue. What’s going on with MACs? A VM host has a MAC for itself. And then each container on the VM host that connects to the virtual switch has it’s own MAC address … but the network sees only one interface. Have you figured it out yet?

By default, Hyper-V has MAC spoofing disabled on every virtual NIC – a virtual NIC can only have 1 MAC address. What I needed to do was, at the host level, run the following to enable MAC spoofing on the VM host’s virtual NIC: