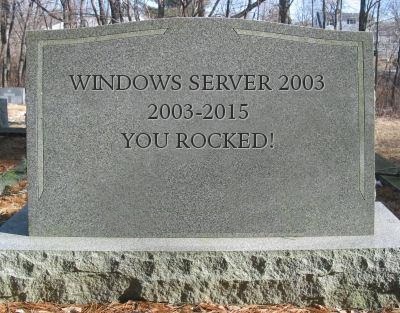 The year was 2003 when I joined a spinoff of Hypovereinsbank called Hypo International, a finance company that would later try to crash the European economy (allegedly). HVB was stuck in the past running NT 4.0 Server and Workstation with Office 97. I worked in the HQ of the new company and was responsible for designing our global Windows network. I argued for Windows Server 2003 which had just gone GA, and I won out, and we deployed Windows XP on the desktop. We were going to be bleeding edge, doing all things by the book, and eventually we even ran what would become System Center to centrally manage the entire network. But powering it all was my baby, W2003. W2003 proved to be rock solid.

So today, July 14th 2015, is the last day that Microsoft supports the aged W2003 and derivatives. The date was not a secret so there are no excuses. Fare thee well Windows Server 2003, and I look forward to working with your great, great, great grandchild in 2016.

Attempting to justify your stubbornness on not upgrading from W2003 on this site leaves you open to intense public derision and ridicule.