I am bursting – and I don’t just mean to use the toilet. Here comes the grand reveal for Windows Server & System Center vNext. 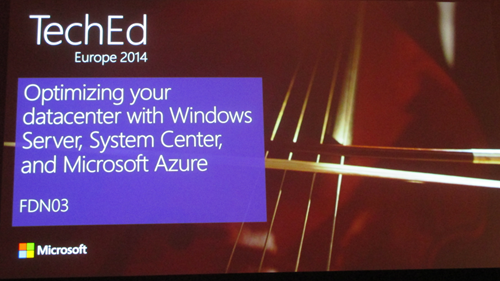 Here we go with a video: your data centre is an orchestra and you are the conductor. Left: compute. Right: networking. In front: storage. Keeping everything is the rhythm of management. Software-define all of it, make it possible in your data centre with Windows Server & System Center. Extend it with Azure.

Jeff Woolsey starts things off. We get the 3 clouds in one obligatory slide. Hundreds of new features that couldn’t be shown in the keynote. This foundation session will dive a little deeper. Jeff talks about “software-defined everything”.

More on WAP. You can run an Azure-consistent cloud on premises. Use this internally or as a service provider. Expect big pushes on WAP: it’s the front-end for enterprise deployments of Hyper-V/System Center for vNext onwards.

MSFT not bothering to change the scalability figures for Hyper-V because they haven’t had a customer hit the WS2012 numbers yet. The numbers were Top Gear numbers – big whoah but so high that they aren’t a blocker.

There is a major emphasis on guest clustering in Hyper-V. No artificial scale limitiations. You can do in-place or rolling upgrades of clusters in vNext from WS2012 R2. This includes mixed mode and live migration within the cluster.

Linux is getting vRSS support for network scalability.

Now RDMA to be added in network virtualization. Supporting VXLAN and NVGRE for SDN.

A new Netwrok Controller from Azure is being added to Windows Server.

A software load-balancer based on Azure is being added in the box in vNext.

There is no such thing as a happy storage customer – Jeff Woolsey.

2012 gave us storage spaces. 2012 R2 added auto scaling. In vNext you get more. Microsoft does not use proprietary storage from the usual names. They use software-defined storage.

Storage Replica is synchronous replication in the box that works with any storage – you can even do it with a couple of laptops (allegedly).

Storage QoS is a killer feature for service providers.

Patrick Lang comes on stage to do Storage QoS demo. Perfmon is running, showing storage throughput from a bunch of VMs. VM1 is dominating.

He creates SLAs and applies them to VMs. Note: all PowerShell. He starts a bunch of more VMs. Some rogue ones try to take the storage bandwidth but the heavy user (a file server)  gets the throughput that it needs for its SLA.

something Winter comes in to talk System Cetner. About 1/3 using SysCtr 2012. One or two hands using older. 2/3 of the room NOT USING SYSTEM CENTER.

MSFT will “ship another version of System Center in the Summer along with Widows Server”.

Making CPS work was an eye opener for System Center. They took over 500 improvements into SysCtr 2012 R2 and vNext. It was too complex to install/integrate the suite.

There is a cultural shift happening. Cloud is now. Users want services now, not in 4 hours or tomorrow. Do on-premises cloud or they’ll do it directly in public cloud. The solution is WAP offering service, SysCtr offering management, and Windows Server/Hyper-V offering compute, networking and storage.

You can do Azure Operational Insights with or without System Center: 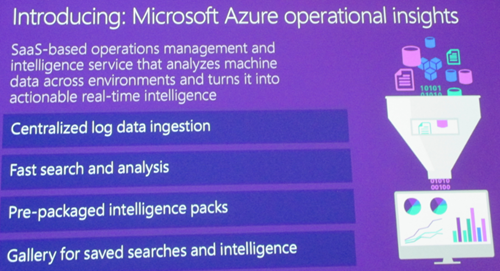 Matt McSpirit comes on. He’s between us and lunch.

Matt demos the setup of ASR and configuring a one-click failover plan.

Summary: Azure is more than just cloud. It’s tricking down to on-premises infrastructure.