It takes a lot to distract me from NFL playoff football, and this retweet by Didier Van Hoye (MVP) accomplished that:

Oooh! Ballooning is the process that allows the Dynamic Memory Virtual Service Client (DMVSC) to remove unused memory from a running virtual machine.

A bit more digging led to a site called Golem.de that is written in German.  My German is very limited (mainly to asking for a beer and saying I have a hotel room served) so I ran the page through a translator.  Here is it what it says about AArch64 in Linux Kernel 3.8 (code submissions recently ended):

Of Microsoft hyper+ V driver can deal in the future with Ballooning. That is to optimize the use of the main memory through under Linux virtualisierte Windows systems.

I kept Googling because one site is not enough to satisfy me on this.  And then I found something in Google Groups.  It appears to be a conversation between one person and a Dr. K.Y. Srinivasan from the Server division in Microsoft, dealing with Linux integration.

Note: Zoominfo is a robot, and a pretty dumb one at that.  It thinks I work for Microsoft, which I do not and never have. 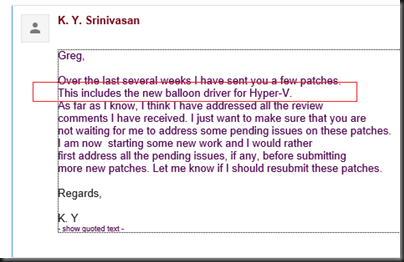 There’s more mention of the balloon driver here.  But here’s another really interesting one on gossamer-threads.com that offers some more evidence.  Once again, K.Y. Srinivasan is mentioned:

The balloon driver is mentioned, but there is a function to get committed memory in a VM.  That’s important: how much memory is being used, versus how much is not.  How much pressure is there, and how much memory does the VM need?

I am not saying that Dynamic Memory is coming to Hyper-V.  That has not been announced.  But the evidence sure adds up that DM functionality is being added to the Linux Integration Services.  That will be great for Linux on Hyper-V, and that will be awesome for public clouds (hosting) and private clouds (large enterprise virtualisation).

2 thoughts on “Is Dynamic Memory Coming To Linux Virtual Machines on Hyper-V?”