I decided to scroll down through the posts in my pinned Hyper-V Twitter search just before I went to bed last night.  And there I found some guy (Wagner Pilar, Brazil, with his Twitter ID claiming he was a NOS3 –or-something lead in Dell) I never heard of posting about Windows Server 8 Hyper-V Virtual Fibre Channel.  I wondered if he was linking to my post so I had a look.  Nope, it was to his on WordPress blog.  But the article looked very familiar.  I ran a translation and it was my blog word-for-word with a small piece removed.  This cheeky frakker was ripping of my blog and letting people think it was his own.

I tweeted the offender and CC’d @Dell seeing as he claiming he was working for them.

Not long after, he started following me on Twitter, maybe hoping I’d follow him back – arse to that!  Then he pinged me, hoping I’d be OK with a credit.  Again, arse!  He can link to my article, but not rip it off.  It was too late.  He sinned, now he had to be punished.  I demanded the removal of the post.

Another few messages via different mechanisms went out to Dell to let them know a person was using a profile with his relationship with them be used in this way.  I am evil that way

This morning I awoke to find that:

Don’t worry Wagner, I’m sure Dell know someone in Twitter and WordPress if they want to investigate if their employees are plagiarising someone while showing their employment status with Dell in their profile.  Or of course, they could just search the Google cache.  Compare that with my original post, called Windows Server 8 Hyper-V Virtual Fibre Channel. 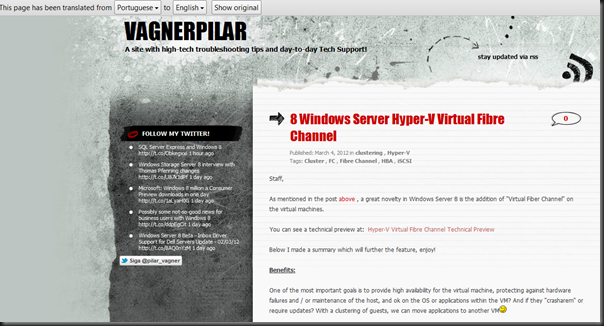 Ah, don’t you love how the Internet never forgets?

I’m not precious about my stuff. I’m far from being the only blogger on Hyper-V.  Plenty of others are busy in their communities, and I love to find them and recommend them for MVP status if they’re putting in the hours and showing the expertise, especially if they are original in how they do it.  I was delighted to spend some time last week with some people I nominated who do just that.  Like me, they found a niche, and did the work.  If someone is doing their own thing and doing it well, I’m happy to link to them and see them “get theirs”.  They, like me, spend time learning and writing.  We don’t make money from this, but we don’t want to be ripped off either.

Here’s how he could have done everything correctly and I wouldn’t have broken his balls over this:

We swim in a very small pool.  If I hadn’t found you, one of my friends would have.  Given how the blog-o-sphere works, I’m sure there are others doing this, and I’m sure I’ll get to kick someone else in the virtual nads too.

One thought on “Caught A Guy Copying My Blog”